William Dun was born to William Dun and Frances Renwick in 1789. He arrived in Australia on the Mariner in December 1821 with his wife Maria (nee Burnett) and daughters.

He brought with him recommendations from Lord Bathurst dated September 1820 to become a free settler and a directive to provide him with a land grant proportionate to his means of bringing the land to cultivation.

William Dun made his land selection by 1822.

His was the first major land grant on the Paterson river. The location can be seen centre as 'Dunn' on the map above. He was assigned four convicts and provided with supplies from the Stores at Newcastle for the convicts and his family. 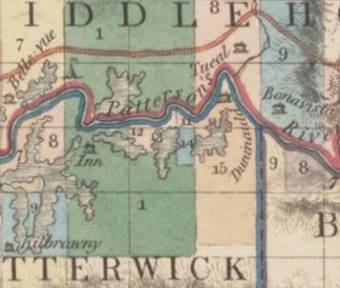 Map of the River Hunter, and its branches : shewing the Lands reserved thereon for Church purposes, the Locations made to Settlers, and the Settlement

Unlike some other Hunter Valley land owners, William Dun remained on his estate and became involved in the community in various ways.

He performed church services near 'Duninald' at the request of the Commandant at Newcastle and received a further land grant for this duty.

In 1822 he was appointed correspondent member at Newcastle of the Committee of the Agricultural Society of New South Wales, and in 1825 his appointment as Coroner was announced.

On the Duninald estate, William Dun constructed his residence of sand stock bricks with two chimneys at either end of the shingled roof. A verandah in the front and three rooms faced east with three more facing the west. 
One of William Dun's daughters, Maria married George Faircloth in 1847 and another, Frances, married Charles Reynolds of Tocal who later owned Duninald.

1). William Dun's brother was General Charles Denis Dun of the Madras Army who died in 1864 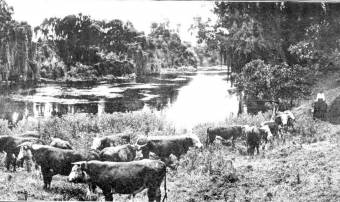