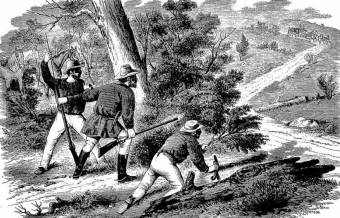 Alexander Telford (Telfer) arrived on the convict ship Warrior in 1835. He was born in Belfast and employed as a soldier and weaver before transportation. He was assigned to the estate of Thomas Potter Macqueen at Segenhoe in 1836 and absconded from there in April. After he was apprehended he was sent to the iron gang at Newcastle and from there to Skellatar, the estate of Chief Justice Sir Francis Forbes. He absconded in January 1839 and in company with James Davis and Archibald Taylor, robbed three drays belonging to Robert and Helenus Scott of Glendon in July.

The drays were proceeding from Morpeth to Patrick Plains laden with shells, one man accompanying each dray. The drays were camped near Black Creek on the night of the robbery. When the three bushrangers approached the drays James Maher, an elderly man who was free and had been employed to accompany the drays, walked towards the men when one of them immediately fired a fatal shot. Maher died four hours later.

The other draymen were forced to lay upon their faces and the ruffians robbed the dray of a small quantity of tea and sugar and three or four pounds in money. Hugh Hughes, one of the dray men was able to later positively identified the prisoner Davis.

The bushrangers were pursued into the hills and captured about three weeks later by District Constable Wilson and two young men named Bridge:

'they were secreted in the mountains, and were tracked by the blacks; when discovered, ten or twelve shots were fired, by one of which Taylor was wounded, before they surrendered'.

James Davis who arrived on the Waterloo in 1838 was charged with the murder of Maher. His accomplices Alexander Telford and Archibald Taylor a 20 year old servant and shop boy from Inverness who arrived on the Lady Nugent in 1835, and who had for the third time, absconded from the estate of Leslie Duguid, were charged with being present and aiding and abetting.

All three were forwarded to Newcastle gaol and then to Sydney gaol in August 1839. They were charged with murder and having fire-arms in their possession.

Having been found guilty all three were hanged on the 29 November 1839.