In 1833 Bushrangers Samuel Bell, Andrew Hamilton and Edward McGuinness were found guilty of robbery and sentenced to seven years transportation. The robbery took place at a house belonging to George Wyndham at Gammon Plains. This may have been his sheep station Collyblu. 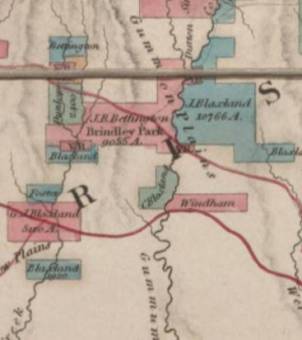 
The Sydney Gazette gave the following account of the trial:

It appeared from the evidence of Antonio, who is an assigned servant to Mr. Wyndham, and who was extremely unwilling to give testimony against the prisoners, until reminded by his Honor of the obligation under which he stood, that the prisoners at the bar came to his hut, and after the usual friendly salutations came in and seated themselves; witness was then in the act of making bread; witness did not think they were bushrangers; he asked one of the prisoners to remove the fire on the hearth, which he said he would with all his heart; after a little conversation the prisoners asked if he had any flour and beef in the hut, when witness told them he had flour and pork but no beef, they replied that was still better; they then ordered witness to leave the hut, with which order he felt himself under the necessity of complying.

Being now convinced they were bushrangers, he went to inform a fellow servant who was making a paddock at some distance, of the circumstance; on returning he saw the prisoner, Bell, leaving the hut, carrying a frock filled with something which he imagined was taken from the hut; the prisoners went away; this station is at some distance from any other; no time was lost in giving information to the nearest Magistrate of the robbery; on the following Saturday, the three prisoners paid a second visit, making anxious enquiry for the man who had informed against them; McManus, who was then in the hut, denied witness, who could see the prisoners through the slabs of his hiding-place; McManus seized a knife and told the prisoners he did not want anything whatever to do with bushrangers; they then departed.

The whole of the prisoners ingeniously interrogated the witness, their object being to shew that he had given the property laid in the indictment to them.

The jury retired, and having consulted a few minutes, returned a verdict of guilty of larceny.

[1]. map of the colony of New South Wales : exhibiting the situation and extent of the appropriated lands, by Robert Dixon / engraved by J.C. Walker.