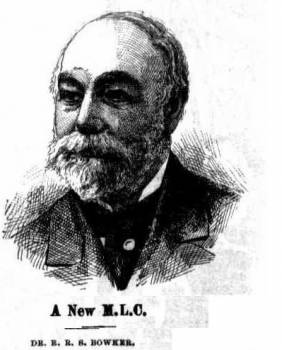 RICHARD RYTHER STEER BOWKER, M.D., was born in England on August 30,1815. He received his preliminary education in the Endowed School, Appleby, Leicestershire, under Dr. Lloyd, and, having served an apprenticeship in the Nottingham General Dispensary, studied in various schools of medicine and surgery in Scotland and England, and for further improvements in his profession spent some time in Paris.

Dr. Bowker was a fellow of the Royal College of Surgeons of England, and a member of the Royal College of Physicians of London. He began the practice of his profession at Bingham, near Nottingham ; but, having been overcome by hard work he determined to take a sea voyage, and came out to Swan River (Perth), West Australia, as doctor of an emigrant ship. He subsequently settled in Newcastle, New South Wales, where he stayed for two years. He then spent two years in the East Indies studying the diseases peculiar to those regions; and in 1853 returned to Australia, and settled in Newcastle, where he has filled several local public office as coroner, alderman, and justice of the peace.

He early began to take an interest in politics and public life, and was elected a member of the Legislative Assembly in 1856. On the dissolution of the Assembly in 1859 he did not offer himself for re-election ; but after some years, being anxious to obtain improvement in sanitary legislation in various directions, he offered himself for re-election in 1877, and was returned.

In Parliament he exerted himself chiefly in showing the danger arising from bad ventilation in schools, and in procuring improvement in this respect. He also pointed out the dangers arising from drinking surface water, and how prolific a cause of typhoid fever this was. He therefore urged the construction of proper water supply works, particularly in his own district of Wallsend. The evils arising from intramural burial also occupied his attention ; and he strongly opposed the building of a large hospital within the city boundaries on the ground that the latest teachings of medical science had shown that hospitals in the country were more conducive to recovery than those in towns. Dr. Bowker also endeavored to get a Medical Bill passed, and also an Act to prevent the immigration of Chinese, looking upon them as a positive danger. He opposed the Public Instruction Act, thinking that if the State inaugurated a system of education for its children it should not have made the teaching of religion a secondary matter. At the next election, in consequence of his views on public education, he was defeated ; and his political connection with Newcastle ended. In 1873 he left Newcastle as a place of residence, and took up his abode at Avoca, Darling Point, Sydney. Australian Town and Country Journal 4 February 1888

One of the voyages he made to Australia as ship surgeon was on the immigrant ship Georgiana which arrived in Port Phillips on 23 February 1841 While on board the Georgiana he kept a journal of his voyage.

At Newcastle Dr. Bowker was called on at all hours of the night for emergencies. Some of the cases are mentioned below.....

In November 1843 he was disturbed at ten o'clock at night to attend a man named Morgan - a 'deformed and exceedingly harmless man' who resided in King Street and lay dangerously ill after being beaten and stabbed with a bayonet by two soldiers from the 99th regiment. When Dr. Bowker arrived he found Morgan seriously wounded with the stab being about three inches depth between the third and fourth ribs.

He was often required to attend inquests in Newcastle. In April 1844, Coroner J.S. Parker held an inquest at Newcastle on the body of 18month old Rebecca Dunn who had supposedly died through the injudicious medical treatment of a man named Peter Rosario At the inquest it was discovered that the child had been ill for four months and attended by Dr. Bowker who had told the mother that he entertained no hope of recovery due to her liver complaint. He recommended oatmeal, arrowroot and beef tea which the child refused. Her mother then called the assistance of Peter Rozario who ordered the flannels in which the child was wrapped to be removed. He mixed some aloes in a table spoon of water with some lump sugar, a teaspoonful of which he gave the child. After giving this medicine he cut up a white onion which he bruised with half a teaspoonful of salt and rubbed the child all over, when he prescribed a teaspoonful of castor oil to be given. He then ordered her to be laid to sleep. The next day to recommended more castor oil and rubbed the child all over again with onion and salt and ordered her to be fed with chicken broth boiled with whole pepper. The mother and child returned to their residence a short distance from Newcastle five days later. On their next visit to Newcastle the child became ill again and Peter Rozario was again consulted when he advised that she had a cold on the stomach and would not live. He again gave the child aloes to cut the phlegm and chicken broth however she died an hour later.

Richard Bowker and George Brooks performed a post mortem on the body and it was found that Bowker's diagnosis of liver disease was correct. The liver was enlarged to double its size and contained several abscesses. At the inquest Dr. Bowker stated that although Rozario's treatment was not directly injurious it was indirectly so by hindering efficient remedies from being employed. Two men John Barker and David Robertson spoke in Court in Rozario's favour stating they had received relief from his treatments, however the jury found that Rebecca Dunn had died by the visitation of God, and they recommended that Peter Rozario be cautioned by the coroner from practicing as a quack doctor.

On a winter's night in 1844 Dr. Bowker was called out at midnight when the lockup keeper Thomas Harrison was viciously assaulted and stabbed by two men. On arrival at the Court House where Harrison resided he found the stab wound had passed completely through Harrison's cheek and that he was in a very dangerous state.

In August 1848, he treated Miss Humphrey, the eldest daughter of Thomas Bott Humphrey of Newcastle. Her dress had caught fire and she was seriously burned before a ticket of leave holder John Brown managed to extinguish the flames. She remained in a dangerous state under the constant medical treatment of Dr. Bowker for some time.

Richard Bowker worked for a time in the East Indies however returned to Newcastle and settled in a house overlooking the harbour and sea. From his house he could no doubt observe any of his vessels entering and leaving the harbour. He owned five vessels in partnership with George Tully by 1853. One of his small trading vessels was the 'Lavinnia'.

He contributed to the educational entertainment in the township and in September 1844 gave an introductory lecture on Chemistry at the Mechanics Institute. Richard Bowker was highly regarded by the inhabitants of Newcastle as in 1848 on his return to the township after a long absence residents contributed to purchase a piece of plate and fifty sovereigns to thank him for his previous and continuing service as a doctor.

In 1858 he married Lydia Phillips in Paterson. Lydia was the daughter of Peninsula war veteran Captain James Phillips. She had probably grown up on the family estate 'Bona Vista' at Paterson. (Lydia's older sister Isabella married David Sloan in 1840.) Richard Bowker later purchased the Bona Vista property from the Estate. Richard and Lydia Bowker soon started a family - Isabel was born in 1859, Robert in 1861, Elizabeth in 1862, Charles in 1864, Richard in 1867, Arthur 1869, Harold 1870, Edward 1872 were all born in Newcastle. Cedric was born in 1876 in Paddington, Sydney.

Lydia Bowker died at Paddington in 1878.

Obituary -Death of Dr. Bowker. The death is recorded of Dr. Richard Ryther Bowker, M.L.C., one of the oldest and most highly esteemed medical practitioners in the State, at his residence, Avoca, Thornton-street, Darling Point, on Friday, April 3. Deceased was born in Lincolnshire on August 30, 1816. He began the study of medicine at the age of 16, when he was apprenticed at the Nottingham General Dispensary. He pursued his studies in Scotland, London, and Paris. He obtained the degree of M.K.C.P. (London) and of F.K.C.S. (England) in 1838, and of M.D. at St. Andrew's in 1839. At 22 he began to practise his profession in Bingham, Nottinghamshire.

He afterwards undertook two sea voyages as medical superintendent of an immigrant vessel, and came to New South Wales, and resided at Newcastle. For the purpose of medical research deceased visited the East Indies, and in 1853 returned to Newcastle. He represented Newcastle in the Legislative Assembly from 1856 to 1859. He did not seek re-election until 1877, when he was again returned. He was a member of the Legislative Council for several years.

Prior to 1877 deceased took up his residence at Darling Point. In 1858 he married Miss Lydia Phillips, the youngest daughter of Captain James Phillips, of Bona Vista, Paterson. Up to two years ago he continued to practise his profession. His wife predeceased him by some years. He leaves a family of six sons and three daughters. Four sons are members of the medical profession, Dr. Robert Steer Bowker is the eldest, Dr. Cedric Bowker (late of the Sydney Hospital), and Dr. Richard Bowker (England) are also sons. The remains were conveyed to the Paterson, and there interred on Monday. - Maitland Weekly Mercury 11 April 1903