Use the Search Box above to find your Hunter Valley Ancestor.
Two men who were born at Newcastle in the 1840 s shared their recollections of the town at the time of incorporation (1859) in an article published by the Newcastle Morning Herald in 1909..........

Messrs Albert William Hudson and Robert Fleming have a clear and distinct recollection of the appearance of the city at the time of incorporation. Hunter Street was a bed of sand, which extended as far as the High- level bridge. Watt-street was the leading business thoroughfare.

Where the Harbour View Hotel now stands there was no building, the vacant land being known as Bolton s Paddock. On the site of the Great Northern Hotel there were three shops. The Bank of New South Wales carried on business on the present site of the bank. Then there was a lane leading to Reid s store, which stood almost at the rear of the bank. Further along Dr. R. C. Knaggs, the father of Dr. S. T. Knaggs, started business as a chemist and druggist. Mr. John Broughton s store adjoined.

The old theatre still stands, the building being at present occupied by Mrs. Cofteros. The shop recently demolished at the corner of Hunter-street Extended was occupied as a bakery by Mr. K Kensey. Mr. Magney s public house was until recently known as the Suburban Hotel, and on the corner of Watt and King streets Mr. Dalby had a boot shop.

The Chamber of Commerce stood between King street and the present council chambers, which was then the post office. On the opposite side of the street the Metropolitan Hotel was kept by Mr. E. Cooke. Then there was a laneway and three wooden buildlings adjoined, one a barber s shop kept by Peter Pariatto. The site of the present PublicWorks offices was a vacant block of land. Croft s hotel and theatre stood on the opposite corner, and Mrs. McGreavy had a public house where the livery stables now stand.

Whyte s butcher shop was on the site of Harris surgery, and the vacant block of land adjoining was the spot where all the circus performances were given.

The military barracks were stationed next to the Newcastle Hotel. The site at the present occupied by the Newcastle Club was a vacant block of land. The residence of the Chief Constable Samuel Holt stood on the site of St. Philip s Church and the adjoining buildling was the Presbyterian Church. The walls stood for twenty years before the church was completed.

According to Mr. Hudson, the first post office in Newcastle was in the old stockade building in Watt street; the second on the site of the Newcastle Herald office, and the third in Watt street, in the old building which afterwards served as the council chambers. 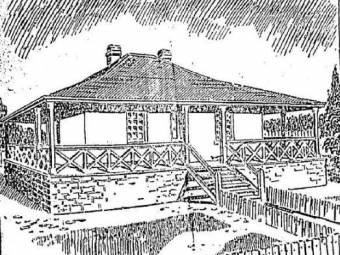 The first piece of road made after the incorporation, was at the foot of Watt street.

Mr. Fleming s father built the first house in Honeysuckle Point, on the site of Mr. Peate s tailoring establishment and the family resided there for some time before leaving for Linwood, where Mr. Fleming, senior was again the first man to build a house.

At the time he resided in Honeysuckle Point, Mr. Fleming says it was a dense scrub, extending as far as the site of St. Andrew s Church in Laman street. The scrub was so thick that it was impossible to ride throught it. The second house was built by Mr. Carpenter, almost opposite where the Honeysuckle Fire Brigade Station stands.

The first hotel was occupied by a Mr. John Devlin, who was afterwards killed through being run over by a coal waggon. This hotel stood on the site of the present Empire Hotel. The Star Inn, and the Union Inn, were the next hotels built, about four years before the incorporatoin of the city. Mr. John Butler Hewson opened the Union Inn and Mr. Ewan Cameron, father of the present licensee, built the Star Inn.

The first sod of the railway was turned near the Bullock Island railway crossing, and Mr. Fleming has a distrinct recollection of the navvies employed on the viaduct throwing down their tools and having a jolly time when news was received of the fall of Sebastopol.

The tweed factory at Stockton was in full swing, also the flour mill at the corner of King and Perkin Street. A paddock at the corner of Bolton street extended as far as the shop occupied by Mr. Johnson, and it was here the blacks camped in large numbers. They mostly came from Lake Macquarie and Port Stephes. Red Jimmy and Billy Blue were well known characters.

The race meetings extended over three days, and to add to the attractions the sports of the early days usually brought off a main of cocks before the races started. All the races were run in heats, and as can be imaged, the arrangements were of a primitive character. For instance, all who fell under the influence of drink were chained to a tree until the last race was run. Numerous attractions were provided in the way of games.

Mr. George Tully was Newcastle s first postmaster, the business at this time being carried on in the old stockade. Mr. Thompson succeeded Mr. Tully as postmaster.