The schooner Martha was built in Sydney in 1799. She was owned by Messrs. Boston and Co., and carried a crew of four. [1] Her captain was William Reed who was previously seaman/quartermaster in the Sirius and also master of the government schooner Francis. [2]

John W. Earnshaw described how the partnership Boston and Co., came about - John Boston arrived as a free settler on the Surprise in 1794 the same vessel that brought the Rev. Thomas Fysche Palmer, a Unitarian minister, into exile and his young friend James Ellis, a young Dundee weaver who chose to accompany Palmer. These three men became partners in the trading company Boston and Co., with John Boston as the figurehead, and Palmer's mature outlook guiding the company. At first they tried farming but later set up as traders and by 1796 the partners were convinced that their fortunes were to be found in the seas and unknown coasts of this new land. The first small craft they built disappeared at sea and they set about building a second vessel which was the Martha.

The Martha sailed to Norfolk Island carrying salt and pork and afterwards entered into the sealing industry.[3]

In 1800 Boston and Co., made one of the first attempts to bring coal in commercial quantities from the Hunter River. It was on this voyage that the discovery of Lake Macquarie was made..... 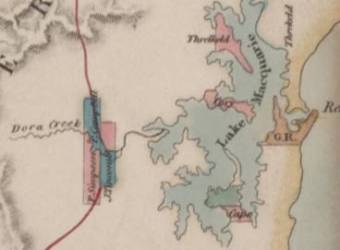 The Martha, having been allowed to go to the Hunter river for coals in the beginning of the month, on her return, having anchored in some very bad weather in the north part of the harbour, Little Manly Bay, was by the parting of her cable driven on a reef of rocks, where her bottom was beat out. With the assistance of the officers and crew of the Buffalo, she was got off, and, being floated with casks, was brought up to Sydney, where her damages were found not to be irreparable. By the master's account it appeared, that he had not been in the (Hunter) river, but in a salt water inlet, about five leagues to the southward of the river, having a small island at its entrance. He was conducted by some natives to a spot at a small distance from the mouth, where he found an abundance of coal. [4]

William Reid/Reed had entered Lake Macquarie by mistake. He was able to gather a cargo of coals from the lakeshore and it was on the return voyage to Sydney in August 1800 that the Martha ran ashore near Manly.

[2] The Australian Dictionary of Biography Online

[4] An Account of the English Colony in New South Wales From Its First Settlement in January 1788, to August 1801 by David Collins. Volume 2