Use the Search Box above to find your Hunter Valley Ancestor.
Herbert Owen was born in Caenarvonshire, Wales c. 1808. He was married with two children when he was tried at Ruthen, Denbigh Quarter Sessions on 18 August 1830 and sentenced to transportation for life for house breaking. He was sent to the Justitia hulk where he was admitted on 6th October 1830. 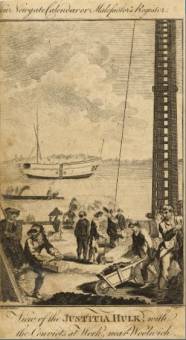 On 17th February 1831 he was transferred to the convict ship Exmouth for transportation to New South Wales. The Exmouth arrived in Port Jackson on 28th July 1831

On arrival Herbert Owen was assigned to William Kelman at Kirkton in the Hunter Valley. He absconded from Kirkton in October 1831 but was apprehended a week later.

He absconded again in 1833 and was suspected of committing an outrage on an aboriginal at Glendon on 29th November 1833. A Reward of Twenty Pounds was offered to be paid to 'any Person or Persons who may apprehend and lodge the said Herbert Owen, one of the Hunter river marauders in any of His Majesty's Jails. The description posted stated that he was a top sawyer from Canaervonshire with a ruddy complexion, light brown hair, brown eyes, perpendicular scar over right eye, scar on nose, scar right side of chin.

He was captured and returned to the Singleton area.

He was admitted to Newcastle gaol from Sydney on 5 March 1841 and was to be returned to Patrick Plains, however absconded from the custody of a constable on 23 March 1841.

Reward notices continued to be posted in the Government Gazette for the next few years. Herbert Owen was still at large in 1848.