Use the Search Box above to find your Hunter Valley Ancestor.
Date of Seniority Royal Navy 7 October 1835


Henry Walsh Mahon was born in Ireland in 1809. He studied at the Royal College of Surgeons, Dublin, the École de Médecine, Paris, and King's College, London. In 1835 he became a Surgeon in the Royal Navy.

Later he was Staff Surgeon to European Pensioners in New Zealand. In retirement he was an honorary member of the Surgical Society of Ireland, and a Member of the British Medical Association. [1]

Henry W. Mahon was initially appointed to the Mexborough convict ship in 1841 [2]. This did not eventuate as John S. Hampton was Surgeon on the Mexborough departing from Dublin on 12 August 1841 and Henry Mahon was employed as Surgeon to the Barossa which departed Sheerness two weeks later. 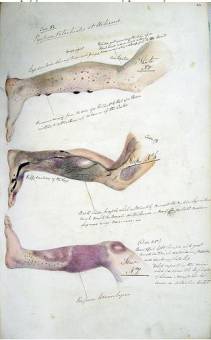 Description: Page from the journal of Henry Walsh Mahon showing the effects of scurvy, from his time aboard HM Convict Ship Barrosa

Henry Walsh Mahon was appointed Surgeon to HMS Samarang 1843 - 1846.[3] HMS Samarang under command of Edward Belcher was used for survey and zoological studies of the East Indian Archipelago, the East Indies, the Philippines and Borneo over a period of four years. The expedition aimed to use every facility at its disposal in the pursuit of science, making observations, collecting specimens and making sketches and drawings of rare forms to help advance zoological knowledge of that part of the world.

In January 1848 Henry W. Mahon was appointed Surgeon in New Zealand. He practised in Howick and purchased land in Onehunga in 1850. He departed New Zealand late 1856, receiving a farewell address from Otahuhu military pensioners.
[5]

Henry Walsh Mahon
Surgeon R.N.
who departed this life
9th March 1878
in the 70th year of his age
'Rest for the weary'...Headstones Mount Jerome Cemetery, Dublin [8].

Probate of the Will of Henry Walsh Mahon, formerly of Westport Co. Mayo and late of 88 Bushfield Avenue, Dublin M.D. Surgeon Royal Navy who died 9 March 1878 granted 6 April 1878 to Mary Mahon and Meliora Gray both of Bushfield Avenue, widows.[9]

[1] Plarr's Lives of the Fellows Online

[4] Tales from the Captain's Log By The National Archives p. 172