Francis Shortt was born in Dumfries. He was a merchant at the Cape of Good Hope before coming to Australia and prior to that he had reportedly been in the service of the East India company and also a surgeon in the Royal Navy.

Francis Shortt departed the Cape on the brig Ann on 2nd July 1821 and arrived in Sydney 1st September 1822. Other passengers on the Ann included Mr. Dealman, Mr. Mackay and Mr. Langford. [2]

In October and November he applied for a land grant at Hunter River on which he proposed to build a saw mill. After his death the grant was described as valuable grazing land comprising two thousand acres situated on the right bank of Hunter's River immediately fronting the government reserve at Nelson's plains and twelve miles by land from Newcastle. In 1823 Francis Shortt also applied for an allotment in Newcastle and Port Stephens on which he also intended to build saw mills. It seems that these did not eventuate.

When he arrived in the colony, he was already in conflict with Alexander Berry. Find out more at Aspects of the Career of Alexander Berry 1781- 1873 by Barry John Bridges.

In 1822 Francis Shortt placed the following Notice in the Sydney Gazette:

I, as Head of the firm of Shortt and Berry, Merchants and Ship Owners at the Cape of Good Hope, which Firm has never yet been dissolved, and shall not be dissolved, until Alexander Berry the junior partner, has accounted to me for the Proceeds of the Cargo sent here on our Ship City of Edinburgh, and for many other transactions, which he has not yet done; hereby warn all Persons, indebted for any part of said Cargo, from paying or suffering to be paid to said Berry (now connected with Mr. Wollstonecraft,) without my permission.

A Court case later ensued and the following verdict was returned : The Jury found that the plaintiff (Shortt) and defendant (Berry) engaged as partners in the purchase and lading of a ship called the City of Edinburgh, at the Cape of Good Hope, somewhere in, or about the month of May 1807, under the firm of Shortt and Berry, and continued as partners in such ship and cargo, and the proceed thereof, until the 6th day of April 1812 at which time the ship founded at sea, and the said partnership terminated. And the Jury further found that no general or other partnership (other than that of the City of Edinburgh) had been proved to have been entered into, or existed between the said parties'.

In February 1823 in Sydney Francis Shortt married Laura Anne Halloran [3]. Laura was the daughter of Laurence Halloran who had arrived on the convict ship Baring in 1819 and was Master of Sydney Grammar School. Laura Ann arrived with her mother, both as free passengers, on the convict ship Providence in January 1822. Others arriving on the Providence included Lieutenant John Laurio Platt and his family.

On 8th December 1824, Laura Anne gave birth to a daughter which they named Laura Frances Shortt. Thirteen months later in January 1826 Laura Anne was arrested for theft. On 29 May 1826 she was found guilty of stealing a brooch and ring belonging to Mrs. Anne Whitehead. She was remanded for sentence and spent the next five months in Sydney Gaol awaiting her fate. Read the Court case here. She was given a Conditional Pardon with the proviso that she leave the Cumberland district for seven years.

The Colonial Times and Tasmanian Advertiser 26 January 1827, reported: A female named Laura Shortt, who had the misfortune to be found guilty some time ago by the Criminal Court, on a charge of grand larceny, and who has been many months confined in Sydney gaol, has received a conditional pardon before sentence. The condition of the pardon is, that she gratuitously transports herself for the space of seven years out of the county of Cumberland. It does sometimes occur, but very seldom indeed, that 'an offender of respectable rank, whose punishment would be imprisonment, if sentence were passed, to avoid the ignominy or inconvenience of imprisonment, solicits permission after conviction, but before sentence to exchange imprisonment by sentence for a voluntary transportation'

On 27 December 1826 The Australian reported that Mrs. Laura Shortt, in pursuance of the conditions in which she obtained a conditional pardon, has taken up her residence at Newcastle. In an advertisement and letter to James Horton taken out by her father Laurence Halloran in the Sydney Gazette in February 1827 it is revealed that Laura and her husband were given accommodation in the Government Cottage at Newcastle. (This may have been the Cottage situated to the west of Newcastle in the are that became known as Cottage Creek and had formerly been occupied be Rev. Threlkeld)

When my daughter removed to Newcastle in obedience to the wish of Government (for I deny any obligatory or compulsory rustication), I wrote on her behalf to Captain Allman the Commandant at that settlement; a gentleman, to whose public character, my humble fiat cannot add an iota of celebrity; with whose name the virtues of humanity and benevolence have become identified. He with that considerate compassion which has marked every act of his Commandantcy kindly allowed my daughter and her husband to occupy apartments in a Government cottage kept by a constable and his wife. Had he not done so, they must have remained from the impracticability of obtaining lodgings 'sub dio aperte' (1)

The notice Francis Shortt placed in the Sydney Gazette two years later revealed the breakdown of their marriage........

The Sydney Gazette on 5th November 1828: The Public is hereby cautioned to give no Credit or trust to Laura Ann Shortt, wife of the Francis Shortt, as he will not be answerable for any debt or debts she may contract from and after the date hereof, she having left her home, and his protection, without any just or reasonable cause.

Francis Shortt died on 31st December 1828 at the residence of Simeon Lord, Macquarie Place Sydney. He was 49 years old. Simeon Lord was granted administration of the estate. 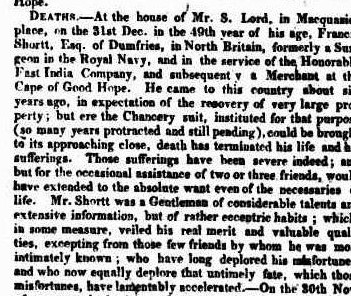 [3] A Statistical Account of the British Settlements - William C. Wentworth