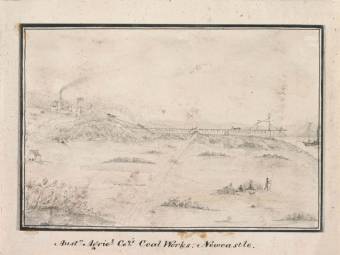 
The first Australian Agricultural Company mine at Newcastle was described in the Sydney Gazette in 1831:

'The main shaft or pit by which the coal is raised to the surface, is situated on a commanding hill about one fifth of a mile to the Westward of the present town of Newcastle and a little beyond the limits of the town as originally laid down in the intended plan.

The pit is 9 feet in diameter, and 46 yards in depth to the working seam of coal; the breadth of the seam being between three and four feet. To prevent the necessity of raising the water to the surface, to keep the mine clear, a tunnel has been driven from the shaft through the side of the hill for carrying it off, at the depth of 16 yards from the surface, so that the water is only to be raised 30 yards. The tunnel also passes through a smaller pit, at a short distance from the main one, which has been sunk for the sake of ventilation. The coal as well as the water is raised by means of a steam engine made by Messrs Hawthorn, of Newcastle upon-Tyne, and equivalent to the power of twenty horses, when worked at the pressure of twenty pounds to the square inch upon the piston.

This power is considerably more than these mines can ever require; besides which, a second engine of the same dimensions, and complete in all its parts, is ready to supply any deficiency which may occur from breakage or other accident, so as to prevent any possibility of delay on this account. The coal being raised to the pit's mouth, is hoist into a large clean coal yard, enclosed by a substantial brick wall, and capable of containing between one and two thousand tons of coal. From the gates of this yard an iron railway is constructed the whole way to the end of the new wharf; a distance of three hundred and thirty yards, or nearly one fifth of a mile, of which one hundred and thirty yards next to the pit mouth are on an inclined plane, and has a double railway, and the other two hundred yards are nearly on a dead level to the end of the wharf.


The wagons, each holding exactly one ton, and of which from fifteen to twenty are provided, are lowered down the inclined plains by a rope passing round a very large wheel, the other end being attached to a certain number of empty wagons, which are thus drawn up by the weight of the full ones. The rope is unhooked when they reach the level, and three of them being linked together and pushed to the wharf by one man, the coal is instantly discharged into the vessel's hold by a long shoot, ingeniously contrived to overhang the vessel, simply by knocking out a bolt, and thus dislodging the bottom of the waggon.

Coals may thus be delivered on board as quickly as any ship can receive them, some intervals being requisite for leveling them in the hold. The inclined plane above described is formed by a bank of earth, coated with sods on each side to bind it together; but the level part of the railway is supported on a strong wooden frame of solid timber, elevated from ten to fourteen feet above the ground. As the Maitland road passes under a part of this railway, a sort of drawbridge which one man can lift is so constructed as to enable drays to pass when loaded unusually high. The quantity of timber used in the construction of the railway is estimated at 169 loads at 40 cubic feet to each load.

The depth of water in the channel at the end of the wharf, is, in ordinary tides twelve feet at low, and seventeen feet at high water; and to prevent the piles from being eaten by the marine insect, called by the natives cobra which have quite destroyed the old wharf, each pile is sheathed with copper, which, it is expected, will preserve them for many years. With the facilities thus afforded for obtaining coals at Newcastle, in any quantity, and at a moderate price we trust that some competition will be excited among our ship owners in bringing them to the Sydney marker. Two or three vessels from 60 to 80 tons each (which is large enough for Newcastle Harbour), might be profitably employed in the coal trace and would soon have the effect of lowering the price of coals an object which becomes almost daily of greater importance in proportion to the increasing scarcity of wood in this neighbourhood - Sydney Gazette 31 December 1831 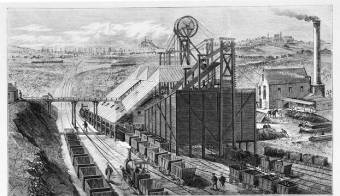 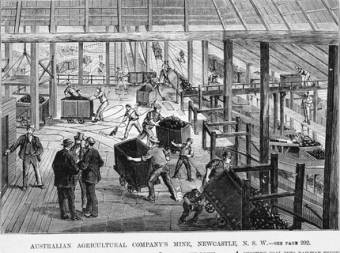 4). The Coal Mines of Newcastle - Their Rise and Progress by George H. Kingswell - Lachlan Wetherall

6). John Armstrong's Map of Newcastle 1830 showing the location of the Company's mine and intended location of intended wharf