Edward Foord Bromley was born c. 1770s. He was appointed Surgeon in the Royal Navy in 1795 and was employed as surgeon to several convict ships over the next thirty-five years.

He first arrived in Australia as Surgeon on H.M.S. Calcutta in 1803. The Calcutta arrived in Port Phillip on 9th October 1803, after a voyage of 168 days.

He was employed as Surgeon Superintendent on convict ship Ocean in 1816 and Almorah in 1817. The Almorah departed the Downs 26 April 1817 and arrived in Port Jackson on 29 August 1817. Dr. Bromley returned to England via Batavia in September 1818 on the Ocean.

On 7 April 1819 in England he gave evidence before the Select Committee as to conditions of prisoners on convict ships.

He was Surgeon on convict ship Lord Wellington arriving in Sydney on 19th January 1820.

After arriving in Sydney on the Lord Wellington, he sailed to Hobart on the Castle Forbes where he took up the appointment of Naval Officer succeeding John Drummond in the role. [1] 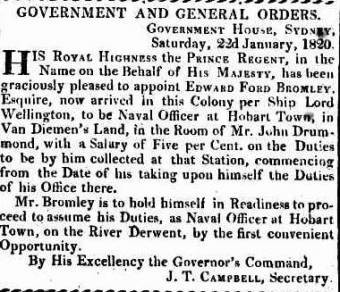 A son, Edward Samuel Foord G. Bromley was born to Edward and Sarah on 8 September 1823 in Tasmania. (Edward died in Victoria in 1874).

A son Charles Bullen was born in 1828. He died at Montford Cottage, Lower Clyde, after a short illness, aged 14. (youngest son of the late Dr. Bromley R.N. formerly Naval Officer of this colony much regretted by all his friends to whom his kind and affectionate disposition had endeared him. [3]

A Christening took place in Tasmania on 27 December 1828 of Elizabeth Ford Henrietta Bromley, daughter of Edward and Susanna Bromley. [5]

In September 1824 the Sydney Gazette reported the robbery of Government money from the Bromley's premises. - The large sum of money in his possession which is always deposited in a strong iron chest, placed for security in his own bedroom. The key of this chest has been invariably locked up in his bureau, in another apartment on the same floor, at the other end of the building, and the key of it carried about his person. Notwithstanding this and other precautions, one or two of the domestics found means to obtain the key of the chest, by opening the bureau with a picklock key; and on Sunday morning last while Dr Bromley was from home, one of them was detected in the act of rifling the chest of its contents. In attempting to secure the prisoner, Mrs. Bromley had to struggle with him from the top to the bottom of the staircase, where he extricated himself and got clear of with his booty. [6]

Edward Bromley was suspended from his position of Treasurer of the Police Fund and Naval Officer in October 1824 after it was found that colonial funds were misappropriated. His clerk Bartholomew Broughton was tried in 1826 for embezzlement of money however was found not guilty of the charge. Another explanation was put forward in the Colonial Times a few years later, however Bromley was held accountable as he had been lax and incompetent but the degree of his guilt was never established. He remained in the colony for the next three years.[7] Much of his property was confiscated and sold in an attempt to replace the missing money.

When he finally returned to England in 1829 to plead his case, he left behind his wife Sarah and young children.

On 4th June 1830 Sarah Bromley placed an advertisement in the Colonial Times, Hobart of the sale by auction of the whole of her household furniture and farm stock to be held at Montford Cottage, Lower Clyde. She was planning to proceed to England, however was still in the colony early in 1831

Edward Bromley was employed as Surgeon Superintendent on convict ship Surry which departed Cork 15th November 1832 and arrived in Port Jackson on 9th March 1833. He returned to London on the Mary departing in May 1833

His next appointment was to the convict ship Numa. The Numa departed England on 24 January 1834 and arrived in Port Jackson 13 June 1834.

He returned to England on the Caroline departing in October 1834.

In January 1835 he arrived in Hobart from Sydney on the Syren. He returned to England on the Auriga in March 1836[8].

The great grandchildren of the late Dr. Edward Foord Bromley - Mr. A. Hawthorn of Augusta Rd and Mrs. E. C. Walshe of Moonah,- form a link with the early aquatic contests held in Tasmania. Dr. Bromley took part in a gig race on March 12 1824, from Hobart Town to Kangaroo Point. The prize was a dinner and Dr. Bromley's crew won.

Previous to settling in Tasmania Dr. Bromley was a surgeon in the Royal Navy, and in various convict ships. He was later appointed to a civil position in New South Wales, and in 1819 was appointed first naval officer at Hobart Town. He became Colonial Treasurer, and held the positions of president of the Van Diemen's Land Bank and the Agricultural society. His country residence was Montfort, on the River Clyde at Hamilton. The property was named after Lord Montfort, Baron of Horseheath, from whom he was descended. The family traced its descent from Sir Walter Bromleghe of Bromleghe, County Stafford. Sir Walter Bromleghe lived in the reign of King John and Sir Thomas Bromley, another ancestor was Lord High Chancellor of England in 1579. A large area of ground was originally granted Dr. Bromley at New Town, including the site of St. John's Park. The father of Mr. A. Hawthorn and Mrs. E.C. Walshe was the late Mr. George Hawthorn who was shipping master at Hobart for 50 years.

It has been stated to us, that letters have been received by Dr. BROMLEY, the late Colonial Treasurer and Naval Officer, with reference to his case, of the most satisfactory description; even more so than his most sanguine hopes could have anticipated. We are very happy to hear of it; but we cannot perceive of how very great an extent these letters can be 'satisfactory'; The utmost that we can conceive is, that he is permitted to quit the Colony, on giving good mid sufficient security, for the amount of the claim on his funds, about, we believe £4,000 having already been paid by sales effected of his property. We know the Doctor offered the security Long ago to the local Authorities but we are of opinion that they could not take upon themselves, with any feelings of self-justification, to accept of it, without reference to the Home Government. Therefore, to this extent, no further can the letters from England be possibly satisfactory. The case is too important to admit of anything more. The defalcation was serious. It was clearly proved to have originated in carelessly kept accounts; whereby Bromley suffered himself to be related. Consequently, further excuse or lenity could not in justice be shown. We pity Dr. Bromley and always did. We consider him to be a man more sinned against than sinner. He was too generous, too hospitable, and too unsuspecting of his situation. But he was careless in the extreme, and for this even his dearest friends themselves will censure him. In corroboration of our statement, that the Colonial Treasury chest was repeatedly plundered while under Dr. Bromley's charge, we have the dying testimony of one of his own servants. It will be recollected that man named Piner (Pyner) pardoned through Dr. Bromley's recommendation, went home with Colonel Sorell, on the Guildford. It appears from accounts subsequently received, that this man, having committed some depredation in England, has been tried, convicted, and executed. Previous to his death, he confessed that he had not only robbed Dr. Bromley, his generous master, but the Colonial Treasury chest repeatedly ;and this statement is fully borne out by the further testimony of a female now in the Colony, who was present at the time. We now again repeat, we hope Dr. Bromley's letters may be as satisfactory as they are said to be ; and nothing will ever give us greater pleasure than to have to record the extrication of that Gentleman from all his embarrassment. (*John Pyner arrived on the Richmond in 1822)