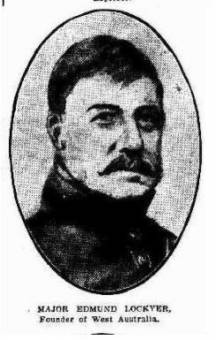 Edmund Lockyer was born on 21 January 1784 in St Andrew's Parish, Plymouth, Devon, England, the son of Thomas Lockyer, sailmaker, and his wife Ann, nee Grose. He entered the army as an ensign in the 19th Regiment in June 1803, was promoted lieutenant early in 1805 and acquired a captaincy in August. He was promoted major in August 1819 and in August 1824 transferred to the 57th Regiment. His service had been in England, Ireland, India and Ceylon.

He was brother of Major-General Sir Henry Frederick Lockyer who arrived in command of the Guard on the convict ship Henry in 1823.

Edmund Lockyer arrived in Sydney in the Royal Charlotte in April 1825 in Command of a detachment of the 57th and accompanied by his second wife Sarah Morris and ten children.

In August 1825 Governor Sir Thomas Brisbane instructed him to proceed to Moreton Bay in the cutter Mermaid, to explore the Brisbane River as far as he could go with prudence', and report on the animals, birds, minerals and natives'. Lockyer set out on 1st September and, with John Finnegan, a former castaway who had guided John Oxley in this district in 1823-24, explored the river in a small boat for 150 miles (241 km), about twice as far as Oxley had reached. [1]

Edmund Lockyer's journal was published in Rev. Charles Pleydell Neale Wilton's Australian Quarterly journal of theology, literature and science in 1828. The journal has been digitized by the State Library of NSW. Below is an excerpt from the journal of the first seven days of Lockyer's voyage on the Mermaid between Hunter River, Port Macquarie and Moreton Bay.

1st. Embarked on board the Cutter Mermaid.

2nd -At 5 o'clock a.m. sailed from Sydney - after a fine run anchored inside Nobby's Island, Hunters River - At half past 6 p.m. landed the Detachment of the Buffs.

3rd -& The Brig Amity lying here - learnt that she had not the boat, that was supposed to be on board that vessel - At 11am sailed for Port Macquarie

4th - Arrived off Port Macquarie, at 5 a.m. went on shore - the Brig Henrietta had sailed from thence with the boat, that was said to be in the Amity - Captain Gillman offered me any of his boats, that I thought would answer; on inspecting them, they proved quite unfit, except a boat belonging to Lieutenant Owen, which I considered my duty to purchase for government, as the one furnished at Sydney was incapable of carrying the necessary articles etc., for the expedition, besides being very much the worse for having been badly used, and was patched up, and not safe. Went on board at 12 a.m. - had the new boat hoisted, and made sail.

5th -& Wind fresh W.S.W. - running along the coast - found the head lands to answer correctly as laid down by Captain Flinders, passed Cape Byron and Port Danger, the latter at half past 6p.m.

6th - Wind S. light airs, at day light close in with Point Look out - passed in between the Reef of Rocks and flat Island, Plenty of water eighteen fathoms to eleven to the outer buoys of the Channel, leading into Moreton Bay by Amity Point. In the channel, not less than four fathoms and half at the last of the ebb - good anchorage inside and close under the shore of the land - Inside Amity Point from this anchorage through the Channel up to Peel's Island, not less than four fathoms at high Water; after rounding Peels Island plenty of water for ships of any size and good anchorage, which continues all the way up to the Green Islands and from thence to the buoy on the spit of land off the mouth of the Brisbane.

7th -& At 6 o'clock weighed anchor and stood for the river - came to anchor at the buoy on the end of the spit. The navigation would be considerably facilitated by regular buoys being placed of different colours, red and white, to mark the sides of the channel. At 3 o'clock p.m learning from Mr Penson, the master of the Mermaid that he did not think it prudent to take the cutter over the bar, I departed in my boat, to proceed to the settlement up the river; on going over the bar, which was then high water, found upwards of 12 feet all over the passage by which I entered. At half past 7 o'clock, landed at Eden Glassie, Captain Bishop 40th Regiment, Commandant.

The Australian quarterly journal of theology, literature and science - Journal of an excursion to Moreton Bay, and up the River Brisbane in the Year 1825, by Edmund Lockyer Esq., J.P. - late Major, in His Majesty's 57th Regt. of Foot. p.268

1). More about Charles Penson, Captain of the Mermaid.

2). According to John Dunmore Lang, Edmund Lockyer was possessed of a gentle and humane disposition.(2)

3). Lockyer's daughter Ann was married to Captain James Brown who arrived on the Norfolk in 1825. Ann Brown and her four children perished in the wreck of the Lady Munro in 1833.

4). Edmund Lockyer was Superintendent of Police at Parramatta in October 1827 when a riot broke out amongst the women at the Parramatta Female Factory.

5). Edmund Lockyer died at Woolloomooloo in 1860 and was buried in the Camperdown Cemetery

In old Camperdown (Sydney) Cemetery there is a West Australian gum-tree which was grown from a seed brought from Western Australia and planted in memory of the man who took possession of Australia. This was Major Edmund Lockyer, who died on June 10, 1860. In 1826 it was feared that the French might establish a settlement on the West Australian coast, so Lockyer was sent in the brig Amity to establish a settlement on King George's Sound. He was given instructions to inform any intruders, principally the French, that the territory was included in New South Wales. However, no French were found there and Lockyer founded a village at what is now Albany. He returned to Sydney and shortly afterwards set out to explore the Grose Valley, in the Blue Mountains. Later he was appointed principal surveyor of roads and bridges. He settled for a time at Ermington, near Parramatta, later acquired property at Goulburn and there took a leading part in the anti-transportation movement. Returning to Sydney, he was appointed Sergeant-at-Arms to the Legislative Council in 1852 and four years later was made Usher of the Black Rod. Four years later he died and was buried in old Camperdown Cemetery. The inscription, on his tombstone reads. 'As Commandant at King George's Sound he hoisted the British flag on 21st January, 1827, in assertion of the first official claim by the Imperial Government to British possession over the whole continent of Australia' The World's News 21 March 1953 (Inscription probably made by Major Lockyer's son in 1931).