George Bridge Mullins was the only son of Mary and Daniel Mullins, surgeon of London. In 1841 when George was 14, the family lived together at 10 Bouverie Street, Whitefriars London. Their neighbours included a coal merchant, solicitor and clergyman. [1]

George Mullins became involved in the Chartist movement and was arrested for his activities as an agitator. It seems his parents tried desperately to save him, however he was arrested for conspiring to levy war against the Queen and her Government and sent for trial along with other Chartists.......

Another Chartist, George Bridge Mullins, a surgeon, was tried for treasonable conspiracy. The trial was similar in all its features to that of Cuffey and the other prisoners who were convicted at the September Sessions; Powell being again a principal witness. George Davis gave evidence that the prisoner laid before the 'War Committee', a plan for barricading London. St. Paul's was to be burnt if it could not be taken. The cross-examination of the witness by the prisoner's counsel, threw great discredit upon Powell and other informers; but as this was no more than every one knew before, the jury found the prisoner 'Guilty.' After verdict, witnesses were called as to character. Dr. Kingston, physician of the Westminster Hospital, deposed that the prisoner was his clinical clerk for two years, and during that time conducted himself with exemplary morality and diligence. Other officers of the same public institution spoke similarly in his favour. He was sentenced to be transported for life.[2]

George Bridge Mullins was transported on the Exile ship Adelaide in 1849. The Adelaide arrived in Hobart on 29th November where 40 men were disembarked. The ship sailed on to Port Phillip but was refused entry and eventually arrived in Port Jackson on 24 December 1849.

George Mullin's parents Daniel and Mary Mullin made arrangements to follow him to Australia soon afterwards.

Daniel Mullins commenced a medical practice in Dieckman's cottage opposite the Presbyterian Church in June 1850. [4]

He gave his advice gratis to those purchasing medicine. In his advertisements he claimed that he was late surgeon to the Hospital for Secret Diseases and West London Dispensary for Treatment of Rheumatism, Diseases of Joints etc. He had been employed by the firm of Messrs Cooper and Co of London for over 18 years. He offered to refund money if a cure was not effected and to correspond with patients from the bush who forwarded details of their cases, until their recovery.

George Bridge Mullins received a Ticket of Leave for the district of Maitland in 1850.[3]

Although he had no formal qualifications, he was elected (by a large majority) to be resident medical officer at the Maitland Hospital in January 1851. [5]

In thanking his supporters he promised to 'endeavour by diligence and a careful exercise of his abilities to promote the interests of the Institution'.

In November 1852 a Special meeting held at Maitland Hospital to investigate the circumstances of William Rigby making a Will in favour of George Mullins.

Mullins was exonerated from any charge of using unfair or improper means of inducing Rigby to make the Will however he resigned from his position at Maitland Hospital soon after 'owing to the many annoyances after the Will of Rigby was left in his favour.' He announced he would commence private practise in Mr. Lockart's Cottage.

Soon afterwards father and son were in partnership in West Maitland .

'Mr. Mullins, Senr., M.R.C.S.L., begs to inform the public generally that he has resumed the Practice of his Profession, at his residence, opposite Mr. Solomon's Stores, West Maitland, assisted by his son Mr. G.B. Mullins, late Resident Medical Office to the Maitland Hospital.'[7]

In August 1854 came the following news from Wollombi -

There is hardly any news interesting to the public worth forwarding from this quarter unless it be that a few days ago a meeting of the inhabitants was held at the Wollombi hotel for the purpose of securing the services of a medical gentleman to the district, in the room of the late and much lamented Dr. Du Moulin. An invitation having been previously sent from several of our residents to Mr. Mullins of Maitland, that gentleman accordingly presented himself to the meeting and stated his willingness to acceded to the wishes of the people by becoming a resident medical practitioner in the district, and also the manner in which he meant in such case to regulate his practice. On the whole his views and intentions were deemed highly satisfactory and it was unanimously resolved that immediate measures should be taken tending to the establishment of Mr. Mullins in the Wollombi. [8]

George Bridge Mullins was still required in 1854 to apply for a Ticket of Leave when he wished to travel between Maitland and Wollombi........ 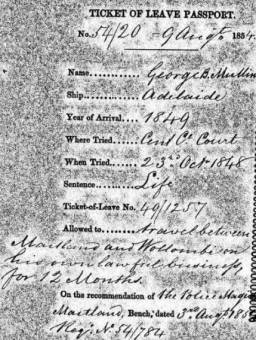 By April 1856 he was in financial difficulties. He had outstanding debts of &pound100 [10]. The house and premises he had occupied at Wollombi were advertised for sale or lease in July 1856 and a description was included in the advertisement....the house was built of stone with two stories, six rooms on the ground floor and six on the first and included stables[11]

In March 1860 George Bridge Mullins returned to the Maitland Hospital. His appointment was confirmed at a meeting in March [12]

In the Maitland Hospital report dated January 1862 the following references to George Bridge Mullins were made....


Committee members all felt that during the time Mr. Mullins had been in the hospital he had devoted himself to the utmost to the discharge of his duty. The visiting surgeons had seen him daily, and the consulting surgeons of whom he (Dr. Scott) was one, had seen him very frequently, and they all concurred in this opinion. The very favourable report of the number of patients treated, and the small amount of cost was due to his care and attention. Mr. Lee said that the building had before been painted by contract, and between the amount it then cost, and the expense under Mr. Mullins' management, there was a difference of &pound35 in favour of the institution - Mr. Capper said that during the last six months he had frequently passed through the various wards, and he had always heard the patients speak of the kindness of Mr. Mullins. His economy and management were also the cause of the funds being in such a prosperous condition. It would but be an encouragement to him to give him such a sum as a bonus, as would show that both the acting committee and the subscribers appreciated the great care and assiduity with which he had done everything in connection with the institution. The garden under Mr. Mullins management was the means of saving a considerable amount at the cost of only one man's rations, and all the fish that was used was caught by Mr. Mullins and the man of the hospital. He therefore moved that a bonus of &pound25 be awarded to Mr. Mullins for his care and extreme exertions.[13]

The image below shows Maitland hospital in the distance and what appears to be a large garden at the front, possibly planned by George Mullins and the hospital gardener - 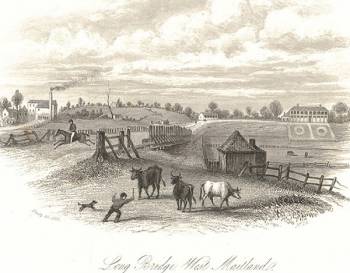 In May 1863 Mrs. Isabella Mullins was appointed matron and housekeeper of the Maitland Hospital[16]

2). Find out more about George Mullins' activities as a Chartist at Chartist Ancestors.

[2] The Annual Register, Or, A View of History and Politics