Patrick Cuffe was one of two fifteen year old lads, the youngest of the 199 men who arrived on the convict ship Boyne in 1826. He had been sentenced to 7 years transportation in Kilkenny for stealing tinware.

On arrival he was probably sent to the Carter's Barracks with the other boys who arrived on the Boyne. By the early 1830's he was being punished for absconding from Hyde Park Barracks. He was sent to work in an ironed gang on at least two occasions.

By 1837 he was assigned to No. 3 Stockade which was situated at Newcastle. 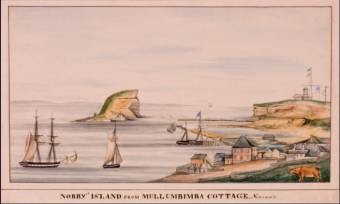 
Many of the prisoners at this stockade were employed building the Breakwater at Nobbys. Here he met up with John Toole who arrived on the Royal Admiral in 1835 and had also been sent to the Stockade for a colonial transgression.

Living conditions at the stockade were harsh. Food supply was meagre, clothing inadequate and punishment brutal. Work at the breakwater was arduous and dangerous as well. In August 1837 two prisoners from the stockade who were working at blasting rock for the breakwater were dreadfully injured in an explosion.

Patrick Cuffe and John Toole absconded together just three months later. The two made their way up the valley to the Jerry's Plains district where in January they robbed the house of William Vivers at Greig's Creek 14 miles from Jerry's Plains.

Vivers recounted the robbery when giving evidence in court - the man asked if he had any prisoners on the farm; Vivers replied, there were some, on which he was told to order them up from the stockyard; Vivers refused; the man replied 'I suppose you know who we are, if you stir I will shoot you; it's death for what we have already done, whatever we may do hereafter.' One of the men went down to the stockyard, carrying a pistol in each hand, and brought up the assigned servants, three in number.

They put the men and witness in a row a short distance from the verandah of the house, and told the men if they stirred, they would be shot They then demanded the keys of the house, which Vivers refused to give them, they repeated their threats, until at length he was induced to give them up when Cuffe said 'put a ball through him if he hesitates.' The keys were given up to Toole. The other two went into the house, Toole ordering witness and his men into the kitchen. A double-barrelled fowling piece was brought out of the house and handed to Toole, who loaded.

When they were ordered into the kitchen, witness at first refused to go, on which one of the bushrangers took him by the shoulder and pushed him in; another said 'put a ball through him if he hesitates a moment.' After terrorising Vivers and his servants, Cuffe and Toole departed with clothing, hats and silk handkerchiefs.

William Vivers rode to Jerrys Plains himself to alert the authorities of the robbery and three mounted policemen and a native black returned with him. That same night the native found the bushrangers' track about half a mile from Vivers' house. The pursuit party continued the next day and at last came upon Cuffe and Toole near some rocks about ten miles distant from Viver's dwelling.

The pair eventually surrendered although they must have known the fate that awaited them. Justice Burton took time to consider before he 'passed that awful sentence which it would be out of his power afterwards to recall', however as the robbery was committed with considerable violence and the prisoners had fire-arms in their possession which they presented, it was impossible for him to avoid passing a sentence of death.....

Many circumstances occur in capital cases which authorise the Judges to recommend a prisoner to mercy, but in all cases where there is actual violence, where the prisoners are armed, where, as in the present case the arms are presented and the robbery committed by means of the intimidation, if the Judges were to recommend to mercy they could assign no reason for doing so. The prisoners had run through the catalogue of punishment, one of them had been sent to a penal settlement, the other many times to an ironed gang and both had been repeatedly whipped. If liberty was the only object of men in escaping from places of punishment, the first thing they would do would be to look for means of getting an honest livelihood, instead of which they generally provide themselves with arms and commence regular series of robberies. The expression made us of by one of the prisoners at the time of the robbery shewed how reckless they were and what was the tone of their minds; 'if you make any resistance we will shoot you, we have done plenty of things that will hang us and therefore we will shoot you' - Sydney Gazette 27 February 1838

On Saturday 19th March 1838 Cuffe and Toole were removed from the Sydney gaol on a dray, seated on the shells intended for the deposit of their remains, and taken to the King William steamer bound for Newcastle where they were to be executed in front of the Stockade men on Tuesday 20th March.. The Sydney Gazette reported that during their progress to the steamer, they manifested the most perfect indifference to the awful doom awaiting them.