He began treating women while the vessel still lay in Kingston Harbour...

The first patient Eliza Burke sought the surgeon's assistance on 8th August 1837 and was found to be suffering from enteritis. On the same day there was a violent quarrel amongst the women in the Mess and Bridget Ryan age 23 received a serious injury when she was hit over the eye with the edge of a pot.

Although the bone was exposed and there was a large haemorrhage, syncope and vomiting the surgeon treated her successfully and she was discharged from the sick list on 18th August.

William Clifford had much to contend with during this voyage because of the very crowded state of the ship which was nearly constantly wet owing to being low in the water...... The Irish convicts desponding, indolent and disposed to dirt, required every exertion to keep their minds in a fit state..

There was an outbreak of scurvy which was treated with vinegar and sugar and as the surgeon had found in previous voyages, early doses of nitrous were effective. After the Cape the weather turned cold and there were several cases of catarrh. An infant George Kelly, age 17 months was treated for dysentery on 11th October 1837 and died on 29th October. One of the women who died was of a broken constitution after a life of prostitution and dissipation. Margaret (Peggy) Fallon from Galway died at sea on 2nd December 1837.

Five free women and six children also came as steerage passengers including Mary Lake or Lark. Sarah Kelly who the surgeon described as the hospital nurse was treated by him for febrile symptoms on 16th December.

On the 27 December, notice was given that families who were in need of Female Servants could be supplied from the prisoners who arrived on the Sir Charles Forbes, provided they applied according to the established forms before the 30th December. The assignees were required to enter into the usual engagements, under a penalty of forty shillings to keep their servants for one month unless removed in due course of law.

The women were landed at the Dock yard on Thursday morning 4th January 1838. Bishop Polding and a Committee of Ladies were in attendance. After being exhorted to behave in their new places in a becoming manner, the women were assigned to the various applicants.

The following fifteen women were sent from Sydney to Newcastle for assignment on 5th January 1838, probably by steamer.

On arrival they were admitted to Newcastle gaol. Most were assigned to settlers and townsfolk at Newcastle, Maitland and Patrick Plains within the next couple of weeks. (2)

Newcastle gaol can be seen on the top right of the photograph below. 1). The Sir Charles Forbes was one of four convicts ships arriving in 1837, the others being the Sarah and Elizabeth, Henry Wellesley and Margaret. A total of 533 female convicts arrived in the colony in 1837. 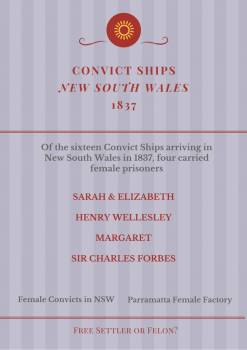 2). William Clifford returned to England on the Portland in March 1838.