The Georgiana departed London bound for Hobart and Sydney on 1st December 1828. She was driven out by stress of weather, with loss of anchors and cables and put into Plymouth on 3rd December, sailing from there on 15 December 1828. [2]

The Georgiana anchorded at the Cape of Good Hope on 27th February 1829. Two prisoners were embarked at the Cape as well as one woman, wife of one of the convicts before the ship departed on 7 March 1829 [2]

During the voyage the most prevalent disease was pyrexia. Three prisoners died on the passage, they were worn out with disease, being a long time in the Hulks. The strictest attention to cleanliness and ventilation was paid and the whole on deck all day when the weather would permit it. [3]

One hundred and sixty-nine prisoners arrived in Hobart on 20 April 1829, three having died on the voyage.

The Georgiana sailed from Hobart with several passengers, a valuable cargo and the two prisoners who had been embarked at the Cape of Good Hope.

The Georgiana arrived in Sydney Cove from Hobart on 12th June 1829.

The cargo from Hobart included 666 bags of wheat, 15 tons potatoes, and 300 tons of sundry articles on account of Government; 7 casks of onions, 20 tons hay; 252 bags potatoes and 24 bags of wheat consigned to various people

John Farley or Farrelly aged 30 who had on board with him his wife and two children, and

Joseph Mutch who gave his native place as Cheshire.

Both were farm servants under sentence of 14 years transportation.

We regret to observe so many of the prisoners by the Georgiana, consisting of mere boys, on an average not more than 10 or 12 years of age. Their youth is certainly a fault that time will improve, but in the mean time it must be very distressing to the Government to know how to dispose of them with propriety. Some of the elder may indeed soon learn to officiate as bullock drivers along with the ploughman, or even as hut keepers and cooks at the stock runs, but the majority are we fear incapable of even such service.

The great scarcity of labourers at present in the island, however, must in a great measure speedily relieve the government from the care of them, for we can conceive no plan worse than allowing them to remain in the barracks at Hobart town where the very worst examples must be incessantly, before their eyes. We remarked one little fellow among them not much more than 4ft high and about 10 years old, who has been in prison nearly 4 years under conviction. When asked by the Principal Superintendent how old he was, the little urchin answered 'he was so young when he was born that he could not tell'. His name we believe is William Edwards, but he is generally known by the appellation of King John. He is one of those unfortunate instruments of the old thieves with which London, notwithstanding all our weeding, still superabounds, that used to be carried in trunks or boxes and left at houses, or covered up in a basket with cabbages, etc. and placed in a convenient corner until night, when it was his duty to open the street door for his confederates to enter or sometimes he was thrust in at a cut out pane of a shop window, which he would afterwards strip.

Not more than 3 of all the three score boys on board the Georgiana could repeat even the Lord's prayer at the departure of the vessel from England, but now we have much pleasure in stating owing to the persevering and praiseworthy exertions of the Surgeon Superintendent Dr. Conway, they can not only all repeat their prayers but most of them their catechism. It is to be hoped that the work of reformation which has been so well begun will advance and be perfected in these boys by their removal to this island.

His Excellency on Tuesdays morning, in the course of his usual address to these men, on their being assigned to their different employments, could not help remarking the disgraceful levity on the countenance of some of them, at the very time they ought to have been covered with abject shame, and a sense of the disgrace attached to banishment, for their offences from their native country.

Many others among them, however, we are happy to say evinced a contrite temper and a firm resolve to merit the indulgences held out by government to the sober and honest labourer. [1]

1). Captain Wentworth of the 63rd regiment - The Last of the Tasmanians - The Black War of Van Diemen's Land 1830

2). William Swallow first arrived as a convict in Van Diemen's Land on the Georgiana in 1829. He became infamous as one of the pirates who escaped in the brig Cyprus in 1829. Read about his adventures here. Later he was re-transported on the convict ship Exmouth before being sent to Macquarie Harbour, and then Port Arthur, where he died on May 12, 1834. He is buried in an unmarked grave on the Isle of the Dead. Although Francis McNamara did not arrived in the colony until 1832, he wrote a ballad about the Cyprus which became one of Australia's well known Folk Songs 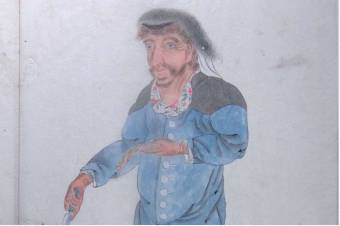 4). David Barry Conway was also surgeon on the Manlius which departed the Downs 17 April 1827 and arrived in NSW 11 August 1827

[3] Ancestry.com. UK, Royal Navy Medical Journals, 1817-1857. Journal of David Conway on the voyage of the Georgiana in 1829. The National Archives. Kew, Richmond, Surrey.