Cassilis - 'On Saturday morning, May 6th, Constable Rutledge was escorting three prisoners from Cassilis to Merton. He left Peberdy's Inn in the morning, and when he arrived at a station of Captain Pike's, five miles from Peberdy's, he entered the hut with the three men, leaving his gun outside. Two of the prisoners were handcuffed, and one loose; the latter stepped out of the hut, and taking up the gun presented it at Rutledge, demanding his ammunition. The constable attempted to wrest the gun from the prisoner, and was shot dead by the bushranger, who immediately took the ammunition belt from the body of the deceased and decamped. The other two prisoners returned to Peberdy's, and reported the melancholy occurrence. It is said that many bushrangers are about the district. '

Soon after a twenty five pounds reward or a Free Pardon was offered for the capture of Benjamin Harris: -

It was coming into winter when Harris escaped and he spent seven long weeks on the run. With a free pardon or £25 reward offered and sympathy for his victim's wife and family, Benjamin Harris wouldn't have found many friends. He was finally run to ground on the 28th June.

Harris, the bushranger who murdered constable Rutledge, of Cassilis, while under escort en route to Merton, was captured on the 28th ult., by Constable Doyle of the Cassilis establishment; and the prisoner is now on his route to Merton, in which district he stands charged with the murder of Rutledge. Doyle is a prisoner of the crown holding the governor's ticket, and it is to be hoped that his Excellency will for the praiseworthy conduct he has displayed on this occasion grant him a free pardon. He has been out for a month, fully determined to apprehend Harris, and he captured him without assistance.'

There was great sympathy for the family of Constable Rutledge and even as Harris was being escorted to Newcastle gaol, already plans were underway to assist the family. A subscription of &pound50 was raised in the Cassilis district to add to a similar amount given by the government for the use and support of his wife and three children.

Benjamin Harris was admitted to Newcastle gaol where it was recorded that he had been a groom in Staffordshire and arrived in the colony on the James Laing in 1834. He was ordered for execution at Newcastle on the 17th October. Mr. Keck came from Sydney by steamer to superintend the execution. 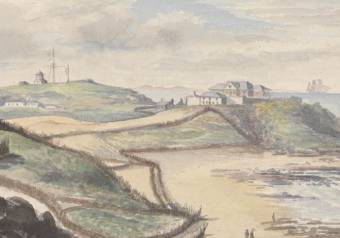 Benjamin Harris was hanged about 9am, probably near the site of the gaol (above Newcastle beach) and was attended 'on the awful occasion by several gentlemen of the Wesleyan Methodist connexion. He met his fate with great fortitude and died without a struggle'.