Use the Search Box above to find your Hunter Valley Ancestor.
Adoniah Vallack M.R.C.S., was the son of William Vallack and Judith Smith. He was born in Kingsand, Cornwall in 1813. He had three brothers, William, Henry Adoniah and Charles Salmon, and three sisters, Judith, Albertine and Emily.[1]

He studied at the Aldergate School of Medicine and was listed in the London Standard as one of the Gentlemen to whom the Court of Examiners of the Apothecaries Hall had granted Certificates of Qualification in 1836. [2]

He rented a house in Prince Street, Sydney soon after arrival and commenced a medical practice[4]

He briefly moved his practice to one in Castlereagh Street in December 1838 however three months later he set up practice in Singleton - Mr. A. Vallack, Member of the Royal college of Surgeons in London and Licentiate of the Worshipful Company of Apothecaries, having removed from Sydney to Patrick Plains where he intends to continue practising his profession. For the convenience of settlers, Mr. V. will in the course of a fortnight open a chemist's and druggist's shop in the new house immediately opposite Mr. Cullen's Inn.[5]

Adoniah Vallack was well respected in the Singleton district. He entered town life, helping to establish an Agricultural Society, attending public dinners, raising funds for worthy causes, giving lectures at the Mechanics Institute and offering himself as candidate in elections.

The respect he held in the town is evident in the following account of a case that was heard by the Magistrates in Singleton in 1846. The case was one of assault and battery - Bailey v. Vallack - and caused a great stir in the town; the court house was crowded and much amusement was afforded . Dr. Vallack 'did not deny the assault, but admitted that the had given the plaintiff a sound thrashing, in consequence of being provoked to adopt such an alternative by the acrimonious and insulting manner of the plaintiff. The defendant was of necessity cast, as the law was imperative. A sixpenny subscription was immediately started in town, to indemnify the defendant in the fine and costs, and in the course of an hour one hundred sixpences were raised and duly presented. 'Out of evil often cometh good,' saith the proverb, and this sum, we have heard, will be handed over to the treasurer of the Singleton Benevolent Society ' [6]

He had been a medical practitioner in Singleton for nine years when he was appointed Surgeon to Edmund Kennedy's surveying expedition rescue in 1848.

A splendid white Arab mare broken in to saddle and harness, Eight brood mares and foals, a superior gig with single and tandem harness complete, were also go under the hammer as well as two saddles and bridles, nearly new, four tons of Lucerne hay and a small herd of cattle.

His substantial brick built cottage with its large garden in Hunter Street was also to be sold. The house contained two sitting rooms, 15 feet square, two bed rooms with verandah in front, and a detached kitchen. There were two stables, one with four and other three stalls and gig house; and a well with never failing water. The garden was said to be tastefully laid out and well stocked with choice fruit trees and vines and substantially fenced all round Adoniah Vallack's friends were to organise a public dinner in his honour before he left the district. [7]

The expedition was for the relief of the explorers of the Cape York Peninsula and with two others was successful, at great personal risk, in rescuing the survivors; the gallant leader, Mr. E.B. Kennedy, and others of the exploring party, having been speared by the aborigines, or starved to death. The account of the whole transaction was published in a pamphlet printed in British Medical Journal 13 July 1872. Sydney [8]

Dr. Vallack was the first to spot Kennedy's faithful friend Jackey Jackey standing on the shore. Perhaps he recognised him from his days in Patrick Plains as Jackey Jackey was from the tribe of that district.......

Saturday, 23rd December, 1848. - About eight o'clock A.m.,. Captain Dobson called down to me, saying that he thought Mr. Kennedy was arrived, as there was a black on shore with a shirt on and trousers. On going upon deck, the captain had left in the dingy for the main land, where the black was standing, I observed with the glass and the naked eye, the black first standing, then walking very lame, then sitting down on a rock on the main land. The dingy made there, and took him on board. It turned out to be Jackey, of Mr. Kennedy's party, who looked very haggard and told a woeful tale. After being on board I wished to take down depositions, fearing anything might happen to him from over-excitement. Depositions were taken, before which he became faint, and a glass of wine revived him, which he told us afterwards, made him 'budgeree' (that is well again.) Continue reading Dr. Vallack's statement of account of the expedition (a full account of proceedings taken by the Ariel, from the time of Jackey's arrival at Cape York on the 23rd December 1848, up to the time of her departure from Weymouth Bay on 31 December 1848 being a copy of my Journal (signed Adoniah Vallack) 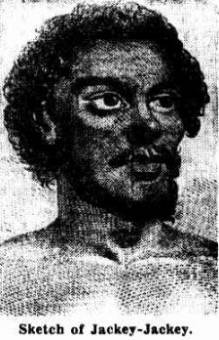 In May 1849 Dr. Vallack was thanked by the Government for his part in the rescue party.

Sir - With reference to the extract from your journal, which was received on the 7th instant, I have the honour to state for your information, that the perusal thereof has satisfied the government that every thing was done which was possible, under the circumstances, for the relief of the unfortunate individuals belonging to the late Mr. Kennedy's expedition whom he found it necessary, from their exhausted condition, to leave at Shelbourne and Weymouth Bays; and especially that your exertions, under circumstances of great peril, surrounded by a numerous and hostile tribe of natives, in rescuing the survivors at the latter place, are deserving the thanks of the government. I have the honour to add, that your zeal and efficient performance of the important duties entrusted to you abundantly show that you possess in a high degree the qualifications requisite for the enterprise in which you so readily undertook to render your services available to the local government. E. Deas Thompson [9]

In 1849 Adoniah Vallack left Australia for the California gold fields. A letter home published in the Maitland Mercury on 6th March 1850 revealed he was working at his profession at Monterey. He sent home from Monterey specimens of minerals and shells.

He travelled much in California, Canada etc and wrote a description of the former country soon after the first gold discoveries, which was partly published in the Sydney newspapers. [8]

Adoniah Vallack sailed from Sydney bound for London on the Maid of Judah in 1855. [11]

He returned to his native Cornwall where he spent his retirement years on a small family estate. He is entered in the 1861 Census residing at Kingsand Cornwall and the 1871 Census.

Adoniah Vallack died on 5th June 1872. His effects were valued at less than &pound100 at the time of his death in contrast with the wealth of his brother Henry a solicitor who died on 27 December 1877 with a personal estate of £20,000 - The Will of Adoniah Vallack formerly of Kingsand in the county of Devon but late of Wringford in the Parish or Rame in the county of Cornwall, Surgeon who died 5th June 1872 at Wringford was proved by Charles Salmon Vallack of 5 St. Michael's terrace Stoke Devonport, the brother of the deceased. [12]

2). Two brothers also came to Australia: William (to Sydney in 1826) and Charles (who was in Melbourne in 1851)Australian Pioneer Medical Index
Charles Vallack was in Sydney and Murrurundi 1848 - 1850.