Use the Search Box above to find your Hunter Valley Ancestor.
The following reminiscences of long-time Newcastle resident James Charles Davies were published in the Newcastle Morning Herald in 1932.


'Among the pioneers of the ship building industry in the Newcastle district very few are better known than Mr. James Charles Davies, of Stockton. His father was ship carpenter on the vessel on which Dr. Leichhardt same to Australia (Sir Edward Paget). Later he contracted for and built the first section of the wharf in Newcastle, called the Queen's Wharf, now known as the Kings Wharf. 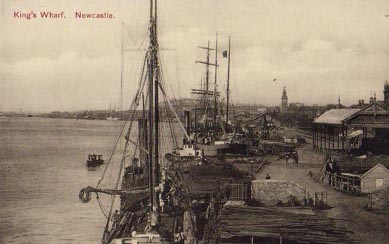 Mr. Davies came with his parents to Newcastle from Sydney in 1859 when he was two years old. The first House in which the family lived after their arrival was situated in Wolfe-street. It was called the Bishops Terrace. and was built by Mr. Hesp. of Hinton. Other residents in the vicinity were Mrs. Cornish. Mr. Barry, Mr. Hining. Mr. J. Brown. Mr. Simon Kemp and Mr. Parnell.

There were no formed streets, and goats roamed at will. Situated at the corner of King and Perkin Streets was a flour mill and at the end of the building there was a spring, from which the residents drew their supply of drinking-water. Between Perkin and Brown streets were livery stables owned by Hickinbotham. At that time the Newcastle Council removed a portion of the hill at Wolfe-street, built a stone wall and fixed steps for pedestrians to descend into King street. Storm water made the wall unsafe and it was condemned and removed. The present wall at King-street was then erected. Mr. Davies recalls the time when Mr. Coucher fell over the wall and was killed. Thick brushwood grew around the hills, and tussocks were plentiful. '


Magnify the map above by scrolling then click on the brown star icons to find the locations of former buildings at Newcastle NSW. Enlarge the map using the icon on the top right

'Near the present Obelisk was a large wooden vertical wheel. On a wooden frame, used to lower coal from the pit top down the hill to the loading chutes. Below the site of the City Bowling Green there was a very deep shaft. and Mr. Davies has a vivid recollection of letting stones drop down while the other Boys counted up to 100 before the sound reached them. Where the Newcastle Mental Hospital building now stands were the barracks, and sports were conducted on the ground.

Next to St. Andrew's Church In Watt-street. at that time Mr. W Berkel had a large dairy. Hunter-street did not extend farther east than Watt street, and Scott-street ended at Market street. There were only a few houses in Scott-street. but there were 10 shipwright' and blacksmiths' shops and they occupied a large portion of the locality; when the railway to Newcastle was mooted a number of the shops were moved to the water's edge and remained there until the wharf was built.

Where the Shortland Hotel is in Market Street stood the Victoria Theatre, and the Market Wharf Inn. On the site occupied by the Great Britain Hotel there was the Angel Inn. There were no houses on either side of Hunter street between Potter’s business premises and Thorn street. The first School of Arts in Newcastle was erected by Mr. Madams in 1870 and it was burned down later. '

'Honeysuckle Point began at the Merewether street railway gates and extended down to the vehicular ferry landing. It was really a suburban area and over 100 houses comprised the residential portion. Vessels were built and repair work done there. Limekilns occupied the position of the water police boat sheds. When the Railway Department wanted the area for workshops the owners received notice to leave and a number of the houses were removed to Bullock Island, Stockton and Wickham.

The best known doctors in Newcastle were Dr. R.S. Bowker and Stacey. To cope with their large practice three dispensers and two boys were employed. As a lad Mr. Davies worked for the firm for a few years. He also worked at the old Pilot Printing Office.

The coal staiths were built by Mr. D. MacQuarie in 1869. They extended from a point opposite Winn’s drapery business to Market street. Mr. MacQuarie built the patent slipway at Stockton about the same time.

The first band formed in Newcastle was conducted by Mr. C. Fanning.

There was an orchard at the rear of the Bank of Australasia.

Mr. Davies attended school conducted by Mr. McPhail at the corner of Brown and King Streets. Mr. Thompson had a school under the Congregational Church building. The first public school was opened in Tyrrell Street.

During one period in early Newcastle straying goats became a nuisance, and the police destroyed well over 100 in one week.

'The first beach fatality that I can recall, ' Mr. Davis says, 'was the drowning of young Sid Chambers. His parents were members of a theatrical company on a visit to Newcastle. The undertow was too strong and he was taken out. Mr. Jack Ice went to his assistance and brought him to the beach. I ran up to the old gaol near the tram terminus for Rev. Father Dowling but it was of no avail. Some time after that incident Miss Watt was drowned.'

'An outstanding event in early Newcastle was the visit of the Duke of Edinburgh accompanied by the Governor. Coal arches were made as part of the welcome. One was erected near the Newcastle Steamships Company’s office at the wharf. My father assisted in the building of the arch. Blocks of coal each weighing one ton were placed in position. When the work was completed an inscription bearing the words “From our inexhaustible coalfields” was affixed to the arch. The first Harbour Master was Captain Allen. Captain Collins was his assistant. Captains Beachy, Lott and Lovett were pilots. They had to board vessels by means of a whale boat. The tug boats at that time were the Bungaree, Prince Alfred, and Southland owned by the Co-operative Steamship Company. Messrs J. and A. Brown had the tugs Rapid and Tamar and the Acquarious belonged to Mr. Dalton.

In wet weather water laid all around Winn’s shop, sometimes a few feet deep. There was another water hole extending from Hunter Street to Laman street, Cooks Hill.

Mr. William Henderson had a sawmill at King and Brown Streets.

About a hundred yards down from the old Obelisk stood a wooden building which was used as a land mark for navigation purposes. Many times we boys sheltered there. Originally it had a windmill affixed.

The police force in Newcastle was not large and was under the charge of Inspector Harrison. '

'In 1870 Mr. Davies went to Stockton and was apprenticed to the shipbuilding trade. With the large number of vessels trading to the port and numerous wooden boats being constructed, the trade was booming. Over 200 shipwrights were paid at the yard in a week. It was not unusual to bring 20 men at a time from Sydney. The wages were 12 shillings a day for 10 hours’ work. '

'The wreck of the Cawarra was the worst maritime disaster in the early days and pieces of the wreckage were secured by Mr. Davies and made into furniture a piece of which he possesses today. The only shop of note in Stockton was one kept by Mr. E. Miner, next to the General Washington Hotel in Mitchell Street. The spring tides flowed up to the floor of that building and in rough weather the suburb was practically isolated.

The first ferry to Newcastle from Stockton was the Phoebe owned by Messrs R. Lynn and J. Bertram. Mr. H. Boyce later ran the Lady Belmore. The land on which the Royal Hotel is built was formed by ballast from vessels.

had to pull across to Newcastle for bread and meat prior to the inauguration of the ferry service.

On the site of the tween factory on Stockton was a cannery. It was subsequently converted into a brass foundry of which Messrs Walker and Morgan were the Proprietors. Mr. Rodgers afterwards acquired the property and carried on business as a brass and iron founder. Mr. John Hay had a slip and sawmill at that time.

The Parish Hall known among the old hands as the old schoolroom, was built by the residents to supply the need of a public school. Mr. Eden was teacher, and he was succeeded by Mr. J. Sommerville, the first Government teacher. The opening of the building was a very important event in the history of Stockton. '