Use the Search Box above to find your Hunter Valley Ancestor.
John Waugh Drysdale was born on 7th May 1816 in Durham, England, son of Rev. John Drysdale and Elizabeth Waugh.

He arrived as a prisoner on the convict ship John Barry on 17th January 1836 after being tried and convicted of embezzlement at Durham Assizes on 29th July 1835. Under a sentence of transportation for life, he was sent to the Ganymede Hulk on 10 August 1835 where his crime is listed as horse stealing. He was embarked on the John Barry on 27th August. In the ship indent John Waugh Drysdale is described as 5' 11' with a dark sallow complexion, dark brown hair and brown eyes. He had a dimple in his chin and a scar on the back of the little finger of the left hand.

In March 1836 two months after arrival in the colony, John Drysdale accompanied Surveyor-General Sir Thomas Mitchell as a medical attendant and barometer carrier on Mitchell's third inland exploration. On this expedition the pattern of the vast inland river system of south eastern Australia was established and huge areas of pastoral country discovered and named Australia Felix by Mitchell. During the expedition there were several men on the sick list however under Dr. Drysdale's care, they speedily recovered.

In May an accident occurred involving the young daughter of Mitchell's guide Turandurey. Four year old Ballandella fell under one of the wheels of the cart in which she was travelling and broke her thigh. John Drysdale immediately set the fracture but as the femur had been broken near the socket, it was very difficult to bandage the limb so as to keep the bone immobile. The child bore the pain with admirable patience and her mother showed every concern, soothing her daughter with soft and musical terms of endearment. This treatment and the mother's care were successful and Ballandella eventually recovered from the mishap.

In October Dr. Drysdale attempted unsuccessfully to save the life of James Taylor who drowned while trying to find a safe river crossing. Drysdale, who had seen many such cases, having come from Newcastle-upon-Tyne, worked for three hours on Taylor. 'The animal heat was preserved by chafing the body and during the whole time the lungs were alternately inflated and compressed without success.'

On reaching Sydney many in the exploration party were rewarded according to the standing and condition of each. Some received absolute pardons, conditional pardons, tickets of leave and financial rewards. Unfortunately John Drysdale, who was considered to be a most trustworthy man, was excluded from these rewards as he had not been long enough in the colony to be entitled by the regulations to any indulgence; all that could be done was to obtain for him a very laborious place in the general hospital by holding which he avoided the hulk. Sir Thomas Mitchell named Lagoons in the Maranoa district halfway between St. George and Mitchell 'Drysdale's Ponds' in honor of John Waugh Drysdale. [1]

Witness at Enquiry into Treatment Towards Aborigines

In January 1837 there was an Enquiry instituted and evidence taken before the Executive Council relative to the proceedings of Mitchell's Expedition in the treatment towards the Aborigines. John Waugh Drysdale was interviewed during the Enquiry: - 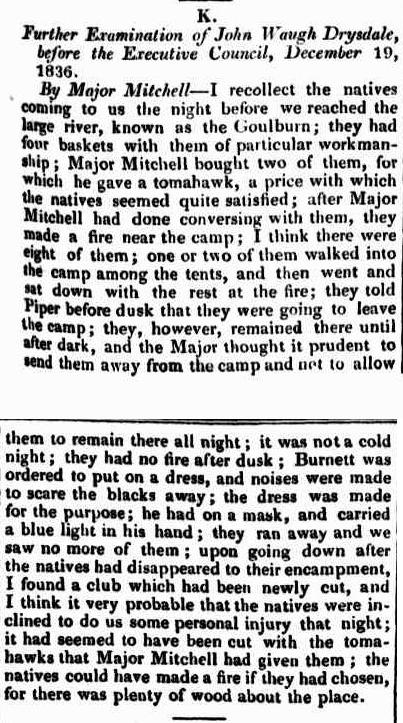 
No doubt John Drysdale read with interest the Court reports when William Stephenson, surgeon, was indicted for having stolen a number of specimens of natural history. Stephenson was naturalist on Sir Thomas Mitchell's expedition and when he retained a number of specimens obtained on the journey, a quarrel broke out between himself and Sir Thomas. William Stephenson was later found not guilty and the case was discharged.

Recorded in the Registers of Convicts Applications to Marry in 1844 is the application of John Waugh Drysdale to marry Louisa Hannan. The application was approved and they were married by Rev. Lynch on 20 August 1844 at West Maitland, New South Wales. Louisa was the daughter of John Hannan and Mary Jane Amberton. John Hannan arrived in 1826 on the Orpheus'. He was a soldier in N.S.W. Veterans Corps and a Waterloo Veteran who had received a 40 acre land grant in West Maitland. His grant extended from Campbell's Hill to Hannan Street and Sempil Street to the Hunter river. This land was known as 'veteran's flat'.

By January 1849 Dr. Drysdale and his family were residing in Wollombi.

In 1849 discussion was generated regarding the correct treatment for snakebite. Dr. Drysdale, in a letter to the Maitland Mercury related his successful treatment of a patient who had been bitten on the front of his left foot by a black snake inflicting eight legible punctures. Treatment was administered within an hour of the patient being bitten, however by then a ligature had been applied and removed by the victim who found it too painful. Although the patient continued to feel giddy, sleepy and sick with constriction around the chest for some time, with Dr. Drysdale's treatment he recovered. Among other treatments a bandage was applied from the toes to the middle of the tibia which he thought to be of 'eminent service' in the treatment of snake bite.

Thomas Maher of Wollombi had reason to be grateful to Dr. Drysdale for the treatment he rendered to Maher's wife after she had been bitten by a copper coloured snake in January of 1849. Maher publicly thanked Dr. Drysdale in a letter to the Maitland Mercury:

'SIR - In returning you my most sincere thanks for the services rendered by you to my Wife, while labouring under the bite of a copper coloured snake, I now beg leave to publicly assert that, had it not been for your experience and unremitting attention to her while in that state, her family would have been left to deplore her loss; but, thank God, she has by your care perfectly recovered. Therefore, dear sir, me, with my family, as in gratitude bound, will ever pray for your welfare. - And believe me to be, dear sir, your humble and obedient servant.' THOMAS MAHER, Wollombi Jan 24, 1849

In April 1849 Dr. Drysdale moved from Wollombi to Morpeth. His consulting rooms were at his residence near Mr. Eckford's butcher shop.

1). For further details of the Drysdale and Hannon families email Sharon and Chris Simmons