View near Woolwich in Kent shewing [sic] the employment of the convicts from the hulks, c. 1800 / printed for Bowles & Carver - State Library NSW


A hulk was a retired vessel, often a former naval ship that had seen better days. They were considered unsafe to sail the seas, but could still stay afloat. The first prison hulks in England appeared in 1776 after Parliament pass the Hulks Act. They were refitted to make them suitable as floating prisons to house the many English felons who could not be sent to America after the war in 1775... There were eventually hulks located at Deptford, Chatham, Woolwich, Gosport, Plymouth, Portsmouth, Sheerness and Cork. Male convicts sentenced to exile in Australia were usually kept in a hulk prior to transportation, although sometimes they were sent direct to the ship from Newgate prison. Conditions on board were very harsh and unhealthy.

If your ancestor was transported to Australia in the years 1802-1849, you may find an entry for him in the Prison Hulk Registers and Letter Books, available at Ancestry.

In Ireland:
Essex at Dublin from 1825 - Read about disease on the Essex
Surprise at Cork

Reports of the Superintendent of Hulks, England 1838

Convict Ships departing England in 1838 included the Bengal Merchant, Lord Lyndoch, Earl Grey, Portsea, Theresa and the John Barry. Many of the prisoners on these vessels had been held on prison hulks under similar conditions to those described below:

There are two half-yearly reports, for the year ending 31st December, 1838, of Mr. J. H. Capper, superintendent of ships and vessels employed for the confinement of offenders under sentence of transportation, and the establishments to which they relate are those at Portsmouth, Chatham, Woolwich, and at Bermuda.

The behaviour of the convicts is generally represented as extremely orderly, both as to the observance of their employment and of their moral and religious duties. Following is an extract showing the mode of treating them, and the manner of life to which these unfortunates are necessarily subjected.

Thus the following is a return of the daily proceedings on board the Leviathan convict hulk, at Portsmouth, August 16, 1838, being the example :

At three o'clock all the cooks are let up to boil the prisoners' breakfast ; at half past five all hands are called up; at a quarter before six the prisoners are mustered, after which breakfast is served down, then one of the three decks is washed, which is done every morning alternately. At a quarter before seven the prisoners (each one bringing his hammock and stowing it away on deck) proceed to labour. On leaving the hulk their irons are examined by the guards, who also search their persons, to prevent any thing improper being concealed; and in order that they may be more strict in the execution of this duty, in the event of anything being afterwards found upon a prisoner, the guard that searched him is made responsible.

The prisoners are divided into ten divisions, each of which is subdivided and delivered into the charge of dock-yard labourers. The prisoners are overlooked by the first and second mate, who patrol the yard, not only to prevent them from straying from their division or attempting to escape, but to make all parties attend strictly to their duties. At a quarter of an hour previous to the return of the prisoners on shore from labour, those employed on board are mustered, to ascertain whether the number is right. At twelve the prisoners return from labour, are searched to prevent any part of the public stores being brought out of the dock-yard, after which a general muster takes place, the dinners are served down, and the prisoners are locked up in their respective wards. A watch, consisting of an officer and half of the ship's company, is set on between decks, where they remain till forty minutes past twelve, when the other half relieves them. At twenty minutes past one the prisoners resume their labour, and at a quarter before six return on board; their irons are examined and their persons searched as in the forenoon. At half-past six o'clock school commences, and at half-past seven prayers are read in the chapel; after which they are mustered and locked up in their respective wards for the night.

The ship's company are divided into three watches (one of which is absent every night, unless duty requires it on board, and returns on board next morning half an hour before the prisoners proceed to labour. New prisoners are made to pass along the quarter deck every morning with their hats off, for a fortnight after their arrival, in the presence of the officers and guards, that their features, gait, etc. may be made familiar to them, in case of any attempting disguise to effect an escape.

On Saturday evening every prisoner washes his person thoroughly before he is allowed to go below. On Sunday all hands are called and mustered at the same time as on the working days, the hammocks are brought up and stowed, and the decks cleanly swept, after which the prisoners return to their wards, and breakfast is then served down. At nine all the prisoners are mustered in divisions on the main deck, for the purpose of seeing that their persons are clean and their clothing kept in proper repair. The steward also, during the week, as opportunities offer, sees that the repairing of the clothing is not neglected, and also issues clothing to those who need it. Divine service is performed by the chaplain once every Sunday. The surgeon or his assistant visits the ship daily. A book is kept in the office, in which is entered a full detail of every day's occurrences.........Justice of the Peace and County, Borough, Poor Law Union and Parish Law Recorder

Below is an extract from 'A History of the Hulks from The Criminal Prisons of London, and Scenes of Prison Life',compiled in 1868 by Henry Mayhew, John Binny. Click on the text to read further: 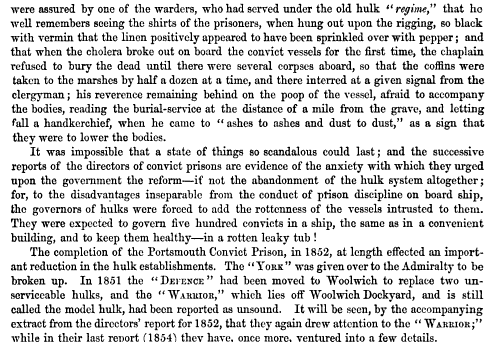 - The Criminal Prisons of London, and Scenes of Prison Life, Issue 7 By Henry Mayhew, John Binny