Use the Search Box above to find your Hunter Valley Ancestor.
John William Penn Blick arrived in Port Jackson on the John Dennison in July 1835. He married Sarah Ross (nee Vine), daughter of Captain Henry Loveday Vine, in 1838 at St. James Church in Sydney. 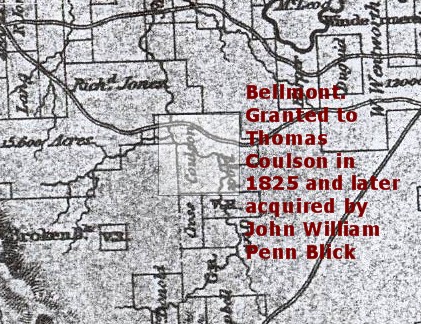 He purchased land from Thomas Coulson (junior) east of Thomas Coulson senior's original grant on Black Creek. The grant was named Bellmont by the Coulsons.

John W.P. Blick fell victim to the 1840's depression and underwent insolvency proceedings, although he retained his land. His daughter Alice was born at this time and three more daughters and a son before 1853.

John W.P. Blick experienced the usual problems of landholders with their employees. In 1846 Mrs. Blick charged employee Henry Pike with neglect of duty. Pike, in Dr. Blick's absence had refused to work to the satisfaction of superintendent William Russell. Pike's employment agreement was cancelled and wages forfeited.

In 1847 stockman Robert Fleming was sentenced to three years work in irons after he was found guilty of stealing a horse from Dr. Blick. Blick stated in Court that he sent stockman Fleming to Black Creek with two horses to be shod, giving him strict directions to return the same evening whether the horses were shod or not. Fleming failed to return and later attempted to sell the horses in Maitland.

As well as problems with employees he suffered a setback in 1847 when a bush fire swept through his property. The fire had appeared to be some distance away from Bellmont and thought not to be a threat however'during the night a strong wind arose, increasing almost to a hurricane after midnight, and so powerful was its effect in forwarding the flames, that early on Sunday morning an alarm was raised that the barn was on fire. All hands were roused up in a few minutes, but in spite of every effort the flames gained ground and shortly threatened the destruction of the dwelling house and the whole establishment. Attention was turned to preventing the advance of the fire and several panels of fencing between the barn and house cut down, and the space between cleared of loose stuff, while the horses and animals were driven away from the buildings. These efforts were fortunately successful, and the house was saved. A valuable thrashing machine, and other implements, with fifty bushels of wheat, a large quantity of straw and some other articles were, however destroyed as was the barn and outbuildings'.

In 1848 John Blick made a claim to lease Crown Land in the New England district described as 17,280 acres named 'Tyringham'. Estimated grazing capability 800 cattle or 5000 sheep. Bounded on the east by the Harness-Cask River 3 miles, running north to its junction with O'Connell's 'Main Water'; on the north by the said 'Main Water' by a line north 3 miles to the top of a high range of hills' on the north by the said range running west or thereabouts four miles and a half; on the west by a line south 6 miles crossing the said 'Main Water'; on the south by a line east to the commencing point. The runs adjoined - the Stockyard or Mitchell's on the east, Ward's (new run) and Hyland's on the north west, O'Connell's on the west and Freeman's and Henry Dangar's 'Bald Hills' on the south.

In December 1848 Bellmont was advertised for lease. There were 1000 acres with 150 cleared that had been under cultivation. 300 acres were in paddocks each with a frontage to Black Creek with a never failing supply of excellent water. There was said to be a good house upon the premises with a vineyard of two acres in full bearing and a large orchard. The old road ran through the property and there was an extensive back run. Dr. Blick was still on the property at this time however he was able to offer immediate possession. By 1849 he was undergoing insolvency proceedings. Claims proved included that of William Henry Burne, Leslie Duguid, and Michael and Eliza Savage. The creditors allowed him to retain his household furniture and wearing apparel. All remaining assets in the estate were to be realised as soon as possible.

John William Penn Blick died on 24th May 1854 aged 42 years 'after a long and severe illness. The death notice stated that he was the second son of the late Capt. Thomas Blick of the Royal Bucks Militia and left a widow and nine young children.

Seven months later the fate of some of their children was revealed in the Maitland Mercury :

'To the deep grief of their afflicted mother, on the 19th and 20th of cholera, after 12 hours severe sufferings, Emily Sarah, aged 7 yrs 8 months and Alice Mary McMullan aged 9 yrs and 4 months; and on the 20th of malignant scarlet fever, Louis Lawrence, aged 14 yrs and 2 months; the eldest son, and second and third daughters of the late John W. Penn Blick'