Use the Search Box above to find your Hunter Valley Ancestor.
William Rouse arrived as a convict on the Baring in 1815. In 1820 he was sentenced to death, the sentence being commuted to transportation to Newcastle for life.

By 1825 he was employed on the Boat's Crew at Newcastle.

He became a constable at Newcastle in 1830 and in 1839 Chief Constable.

In 1843 he failed to apply for a licence for the Steam Carriage Inn which was to close its doors, however he did obtain a licence for his 'splendid new house' under the sign of the The Newcastle Inn.[1] This was situated in Hunter Street near Perkins Street. Later Scott's occupied the site. Image of Scott's Store in 1890. This became the site of the David Jones building. 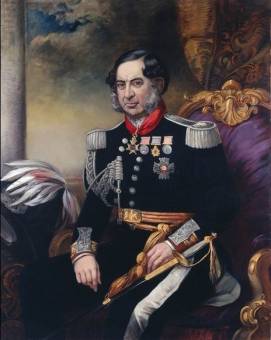 
In 1847 William Rouse was involved in meetings to discuss planning arrangements for the reception of Governor Sir Charles Fitzroy on his intended visit to the Hunter.

The townspeople put quite some effort into the arrangements and Sir Charles was enthusiastically received and welcomed immediately on his landing when a salute was fired from the Signal Station and a guard of honour was stationed on the wharf.

He was accompanied to William Rouse's hotel by an immense number of people including many of the respectable townsfolk such as Rev. C. P. N. Wilton and Major Crummer. On his arrival at the Hotel, which had been made suitable and appropriate in every way for his accommodation, Sir Charles stopped on the threshold of the Inn and gracefully bowed to the assembled multitude, who loudly cheered him.

Afterwards the town address was presented followed by presentations from the Odd Fellows and the Mechanics' Institute. A tour of the town took place when His Excellency was accompanied by his suite, Capt. Moriarty, and Majors Innes, Macpherson, and Crummer, Mr. James Reid, the Rev. C. P. N. Wilton, Mr. Charles Bolton, the sub-collector of customs, Captain Richard Furlong, J.P., Mr. John Allman, J.P., and a few other gentlemen, all on horseback. His Excellency visited Nobby's Island, the
Stockade, and the Gaol, from which latter establishment Sir Charles discharged a confine, an aboriginal native, who was imprisoned for some trifling offence.

After lunch at Rouse's Governor Fitzroy and party proceeded to Stockton on the Stockade boat to inspect the cloth manufactory of Messrs. Fisher and Donaldson; also, their foundry; and the salt works of A. W. Scott, Esq. Later a dinner was held at Croft's Victoria Hotel in which the Governor travelled in the carriage of townsman, John Smith, Esq.[2]

After a sumptuous dinner in elegant surroundings with about forty five of the townsfolk including James Reid, Esq., who officiated as Vice; Captain Furlong, Dr. Stacy, George Darby and Alexander Brown, Esqs., acted as stewards. Toasts were given and at about quarter past eleven His Excellency and suite left the table and proceeded to the house of James Reid to attend the Ball, which was numerously and fashionably attended. Sir Charles left Mr. Reid's at rather an early hour after his arrival there, owing to the fatigue of the day, and from not having had any rest the previous night on board the steamer.

The Governor departed Newcastle the following morning on the steamer Tamar.

William Rouse died 11 February 1853. A Publican's Licence for the Newcastle Inn was issued to William's son Henry Rouse in 1854.

Newcastle historian W.J. Goold in writing of the reminiscences of Colin Christie noted that in the 1850's Rouse's Hotel was considered to be 'out of town', the main part of the town being up near Watt Street. A large poplar tree grew on the footpath in the front of the hotel in those days.