Use the Search Box above to find your Hunter Valley Ancestor.
Cedar groves once flourished in varous parts of the Hunter, Paterson and Williams rivers. In the early days convicts were engaged to work as cedar getters. Working up the river convicts stripped the logs of branches, pushed them into the river, where they were tied together in raft form with the strong vines found about cedar trees and then rafted them to the port.

The small sailing boats from Sydney did not venture up the river but waited in the harbour for the cedar logs to be rafted down.

On what is now known as Stockton there was a primitive sawpit at which the logs were cut for loading on the vessels.

Hugh Meehan was captain of the Anna Josepha owned by Simeon Lord, a Sydney merchant. Meehan arrived at Coal River in April 1801 making anchor on the inner side of Pirate Point (Now Stockton) in the vicinity of a sawpit established there previously. The sawpit was later abandoned for another site on the south shore on or about the old Market Square.


Meehan made his camp on the south shore, between the site of that sawpit and the sea, at a spring or stream of fresh water. [1]

It was dangerous work and as well the cedar getters had the native tribes to contend with as noted by Lieut. Menzies in his correspondence to Governor King in 1804

King's Town, Newcastle,
5th November 1804
Sir,
Herewith I have the honor to enclose your Excellency the monthly returns by which you will perceive that there remains at full ration only one week's flour and spirits. I, therefore, on Saturday last reduced the proportion of flour from ten to six pounds, and by next Saturday, if a supply is not received, must reduce it to four.

One of the sawyers belonging to Underwood and Cable {Kable} has been severely beat by a party of natives up Paterson's River, whom they had very imprudently suffered to get possession of their arms; but I am happy to say he is in a fair way of recovery.

I understand that Mr. (Robert) Brown, whom I furnished with arms and ammunition for his protection, has likewise been attacked up the north branch.

It now becomes absolutely necessary that two or three trusty men should be sent for the purpose of taking charge of our boats going for cedar, as I am necessarily obliged to put arms in their hands for their protection and your Excellency is well aware of the characters here 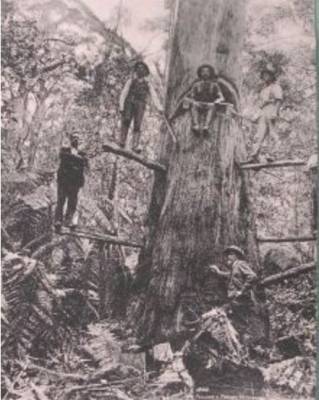